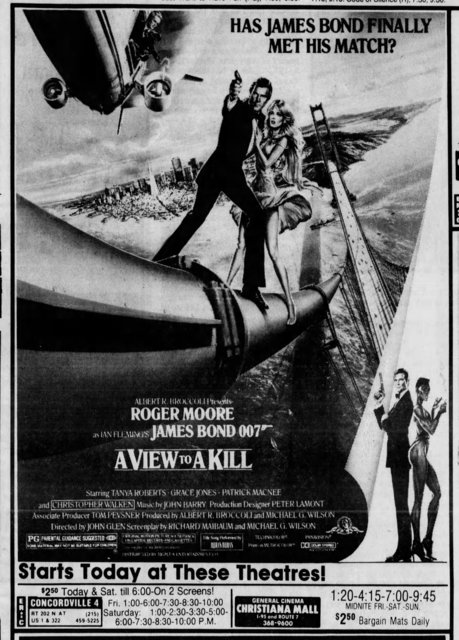 Located at 215 Christiana Mall. I believe the theatre closed in 2003 for unknown reasons.

It was in the Christiana Mall, in Delaware.

I remember it being a very profitable house. Perhaps it was one of the many five-plexes that GCC chose not to expand, and then when these 14+ theatres were built, it couldn’t compete.

The closing of this theater was a tragedy and followed closely on the heels of General Cinemas' bankruptcy. The cinema was on the south side of the mall adjacent to the food court. The exterior entrance and ticket window have been effectively covered with sheet rock and camouflaged to look like the rest of the building. The interior mall portion of the cinema retained its plate glass windows for several months afterward allowing the curious to peek inside at the dark and abandoned theater. The glass was later either covered up or replaced by white painted dry wall. I often wonder if the cinema auditoriums, candy stands, and projectors are still preserved inside.

The Christiana Mall was the perfect place for a cinema. Finances permitting you could spend a whole day a the mall shopping, having a meal, and seeing a movie — though not necessarily in that order. The cinema was a great sanctuary when my wife went Christmas shopping. The kids and I would duck into the movies and emerge two hours later and effectively avoid having to carry packages.

We saw countless movies at the Christiana Mall. The parking area near the food court was one of the safest to park in as it was well lit and patroled by both mall security and Delaware State Police.

General Cinemas fell on hard times during the recession of 2000 – 2001. The last movie I saw at the Christiana Mall was an uncomfortable disappointment. My son and I went to see PEARL HARBOR. The theater used to boast two snack stands, but only one was open and the pickings were slim. Though it was stifling hot the cinema had no air-conditioning. I complained at the front counter but the two hapless employees simply shrugged their shoulders. The cinema shut its doors for good soon afterward.

At the time I read that the AMC chain acquired General Cinemas and made specific mention on its website that it would honor all existing General Cinemas gift certificates and coupons. I had high hopes that the cinema would reopen as an AMC theater, but they boarded it up instead.

It’s too bad this theater will never see customers again. It’s scheduled to be demolished in January 2008 to make room for the Christiana Mall expansion project.

Despite my hope that the cinema would eventually reopen, the surviving complex was demolished in early 2008. The mall expansion project and redesigned food court doomed the entombed theater. I drove up to the mall in mid spring and was surprised to find the former cinema extension of the mall a gutted ruin. No more Christiana Cinema.

This is one of several theaters that I used to attend fairly regularly, not as much as the Tri-State Mall, but still pretty regularly. I think I saw Dune, the Legend of the Lone Ranger, and Silverado here.

Cinemark opened another cinema in the mall on November 20th, 2014.

Christiana Mall opened in 1978. It was a major opening in Delaware as it was the only major indoor shopping center between Wilmington 10 miles to the north and Dover 35 miles to the south. It would become the social hub of teens and young adults since its opening… more on that later.

The theater was an anticipated addition to the mall but it would take almost another year before it opened, just as rivest266 ad shows, in 1979. It was originally only three theaters with the ticket stand accessible from the mall.

Unfortunately, the theater had to keep Theater #3 closed. Adjacent to the theater was a restaurant/bar called Duke’s Pub. It was my understanding that the sounds from the live entertainment in the pub would bleed into Theater #3 causing movie patrons to hear a mix of movie and live music.

About a year later, in 1980, if I recall correctly, Duke’s Pub had a fire. I do not recall if the fire led to its closing or if there were other issues, but Duke’s Pub would close soon after. The theater would acquire Duke’s Pub space and create Theater #4, Theater #5, a second snack bar, and an exterior entrance to the theater.

This long story explains Rivest266’s ad in 1982 announcing the 5-plex, it originally started as a 3-plex.

As with many malls, Christiana Mall would become the hub of activity for teens. For this mall, the theater’s entrance/exit was located at the end of the food court, right next to one of the mall’s entrances. Unfortunately, groups of teens tended to congregate in this area.

The theater itself was starting to become run down near its closing. As SPOK has stated, the air conditioning was not working, only one snack bar was open, and there were issues with patrons after the last showings on Friday and Saturday. It appeared that the mall was not happy with its tenant. When the theater closed, I remember reading that the mall wanted to work with the theater’s new management to make sure any issues could be addressed. The theater never reopened and the glass windows were replaced with drywall/decals that advertised random nothingness.

With the mall’s major renovations and additions, the theater’s old location no longer exists. The old food court has been replaced by a much larger food court with a cathedral-like roof. A new 12(?) screen theater from Cinemark can be found on the other side of the parking lot in its own building.