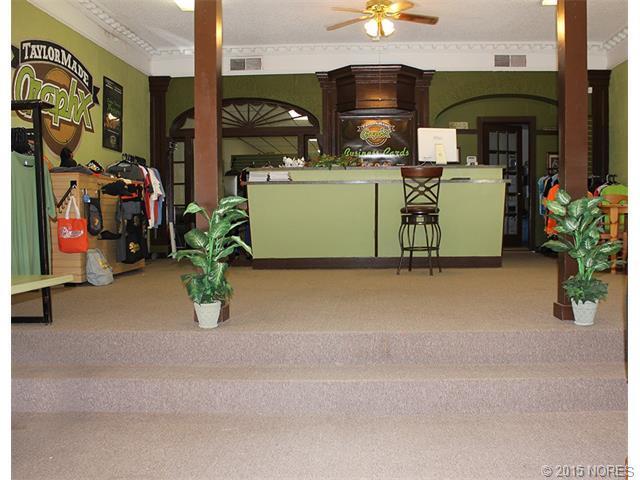 Dubinsky Brother’s opened their Yale Theatre prior to 1914. A rather large theatre for a medium size town, the Yale Theatre had two seperate entrances.

The main entrance was on the 200 block of East 6th Street. Tapestry brick, an ornate box office, a flashy upright sign, and a large “box” marquee complimented this facade.

The E. 6th Street lobby was of French character with fancy plaster alcoves, fine statuary, and decorative ceiling panels. The mosaic tile floor of this chamber was built with a gradual rake to form a ramp which climbed up to a frosted glass bridge that crossed high over an alley in order to gain entry into the auditorium standee. A colorful concession stand was also located in the standee area.

The other entrance was on East 5th Street, off Grand Avenue, with it’s own boxoffice and marquee. This entrance contained a small, functional lobby with staircases that led to the upstairs standee/concession area.

Located above ground level shops was a lovely, wide auditorium, and a heavily draped stage. In order to defeat keystoning problems the projection booth was installed at the base of the steeply pitched balcony (a design later used in the Roxy Theatre in New York City).

After that bawdy period, the Yale Theatre eventually was absorbed by Griffith Bros. and settled down to became just another double feature picture house.

After becoming quite run down and shabby, the Yale Theatre closed in late-1950’s. In the spring of 1965 the auditorium and 5th Street/Grand lobby structure were razed to make way for a drive in bank facility.

Today the e. 6th Street lobby still stands, but because of its sloped floor it was never successfully used for any other purpose other than a theatre lobby.

The below link is still under construction, but in the near future will contain vintage images of the Yale Theatre.

After the Yale closed the First Baptist Church bought many of the theatre seats to install in the sanctuary balcony.
The First Christian Church bought the pipe organ, fixtures, and stage lights.
First Baptist built a new sanctuary 1971, but a few of the original Yale chairs still exist today in their educational buidling.

During its burlesque days perhaps Dubinsky provided a house band that performed snappy tunes like the ones played on these sites – – -
View link
and/or
http://www.spaceagepop.com/lester.htm

Griffith gained a reputation for acquiring beautiful theatre structures, milked them for profit, while letting them dilapidate into a ramshackled mess. The lovely Yale was amoung these.

During its brief period as a burlesque house the Yale Orchestra would played this type music,
View link

Burlesque shows were presented on a sporadic bases at the Yale Theatre, but when they were staged this is what audiences saw -
View link

Recent color shots of the Yale Theatre aaaa9with its awful remodel job) can be viewed on this site,
http://www.roadsideoklahoma.com/node/482

OOPs. I accidently listed the Yale Theatre in OKC instead of the one in Okmulgee. Here is correcd web page,
http://www.roadsideoklahoma.com/node/578

Google maps addresses seem to always be a little off mark, but the location for the Yale Theater would be (aprox 189 East Sixth Street. The auditorium and Fifth Street entrance were razed in 1964, but the Sixth Street lobby still remains.

Here is a modern day view of the Sixth Street entrance to the Yale Theatre (one story bldg with green/white striped awning),
View link