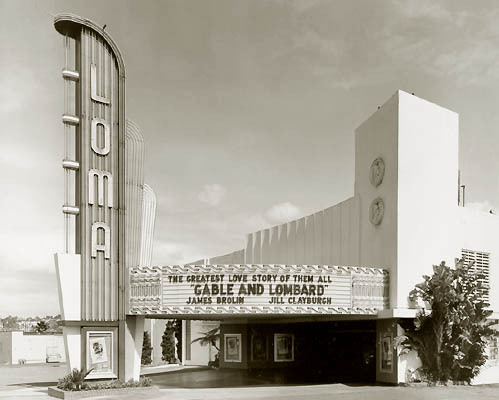 The Loma Theatre was opened in 1945. It was operated by Mann Theatres from 1973. It was closed November 3, 1987. Although the Loma Theatre’s gorgeous signage is still intact, this S. Charles Lee designed former movie house is now a bookstore. Thankfully, much of the interior decoration has been retained.

Man, you can sure tell this is a military town. They were showing “MacArthur” in August of 1977, instead of “Star Wars”!!!

I definitely saw SAYONARA at the Loma in it’s first engagement. 1957

etcmss…McArthur played only 10 weeks at the Loma in 1977 while Saturday Night Fever ran 26 weeks. Meanwhile Star Wars tied up the nearby Valley Circle for 57 weeks starting in 1977 and into 1978. San Diego may still have been a big military town in the late 70’s but my guess is that the movie going taste of the young soldiers and sailors stationed there favored disco and sci fi action rather than the famous WW2 general.

In 1979 I went to see “1941” at the Loma, but my crowning experience in that theater was working as an usher (see my profile picture) during the Summer ‘82 initial release of “E.T.” It was an old fashioned blockbuster situation, with an audience inside watching the film, an audience already lined up outside the theater about four or five abreast and curving around the theater, and a third audience forming up at the bottom the parking-lot. As the patrons roasted and sweated in the summer sunshine, we sold cokes and drinks to them up and down the line from trays that hung around our necks like the cigarette-girls of the old days. Speeches had to be made from the front to get people to move in towards the center, so that we could seat late-comers on the sides, showing them to their seats with our flashlights. Between shows we had to do a quick cleanup, during which one would find the most outrageous things, such as dirty diapers, and once I found a Visa Gold Card. It was a lesson in public management and crowds, plus by repeated watchings I learned where all the continuity flaws are in E.T.! I still can’t believe that I actually wore an Usher uniform for Mann Theaters. It seems like another age! I guess it really was.

I saw E.T. at the Loma during the summer of ‘82. You might have torn my ticket. It was a few weeks into the movie’s run after the initial crowds had dissipated, on a weekday afternoon if I remember right. What stands out about that particular movie excursion is the audacious smuggling of a pot of tea that my sister and I pulled off. I had just made tea when my sister burst into the kitchen and said, “let’s go see E.T.”. “But I just made tea.” “Bring it along.” I had this Chinese tea cozy basket that my mom bought in Hong Kong — a padded wicker basket with slots for a tea pot and two cups. So I put the tea in there and we went. I think the usher may have given me an odd look but nobody stopped me from carrying that basket into the theater. So we enjoyed E.T. over a hot cup of tea.

Yes, I think I remember you! (KIDDING!!!) But I wouldn’t have confiscated your teapot, even if I had seen it! How wonderfully civilized of you! I used to go to the Ken Cinema (and still do on rare occasion), and would invariably order a large cup of Orange Spice tea for sipping in the theatre. There’s nothing like a double-feature with hot tea on a winter’s afternoon/evening. :–)

This place was gorgeous and always had the best presentations of the films that played here. The last film I saw here was TOP GUN. One of my college mates worked as a projectionist in 1980. So sad that it’s gone though its a bookstore when last I knew.

Nope, the last film I saw was STAR TREK IV.

When I was in the Navy I saw both My Fair Lady & The Sound of Music here.

Here’s a new 4-page 50th anniversary FIDDLER ON THE ROOF retrospective featuring a roadshow playdate chronology and historian Q&A. The Loma’s year-long run is mentioned (twice) in the piece.