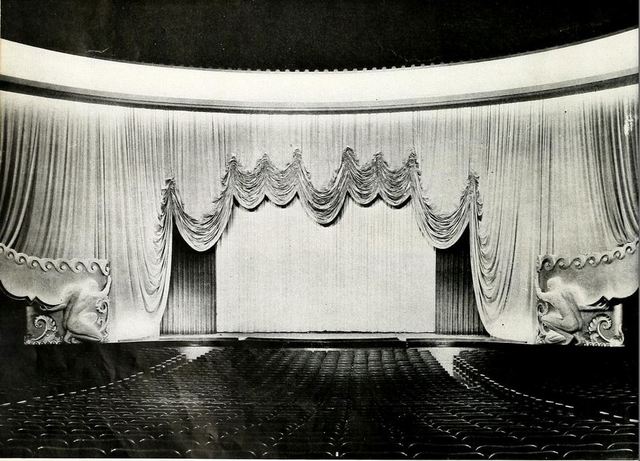 The Cine Plaza was opened on 19th March 1947. It had twin, very large, half circle marquees that sheltered two entrances. Between the marquees was a glass brick wall, approximately two storeys high. In front of the glass brick wall was a huge vertical sign spelling out ‘PLAZA’ in block letters highlighted with neon and lots of neon on the sign itself. Behind the sign was some unusual stair stepped winglet type decorations topped with a small tower that probably reached five storeys high.

Plaza theater was a fancy mixture of Deco with neo-classical styles, with large, artistic nude sculptures of a male and a female as mythology characters at the lobby, designed by Aurelio G. Mendoza. It opened 19 March, 1947, seating 1,900 people in three levels, and it costed four million pesos at the time. In its first years, it had a lighthouse at the top, visible from miles away, a restaurant and a bar, as well as a dancing area, fountains and other amenities. Inside, a fake night sky displayed hundreds of little “stars”, clouds and nebullas, mixed effects according to the movie being projected. After two or three renovation projects, the theater finally closed its doors in 1994 to host a korean clothing store, and the only sculpture remaining is that of a nude woman, that Mendoza did after a woman named Elvira Fuentes, who worked at the local Water Utility Dept. The building is to be demolished sometime in 2006. (Data from various sources, including Diario de Juarez).

Does anyone know if this building has indeed been destroyed?

I have the same question regarding the existence of the theater, or if anyone knows what became of the statues inside?

I found a 2009 street view where it was still standing, split into multiple retail outlets. Link won’t share here properly.