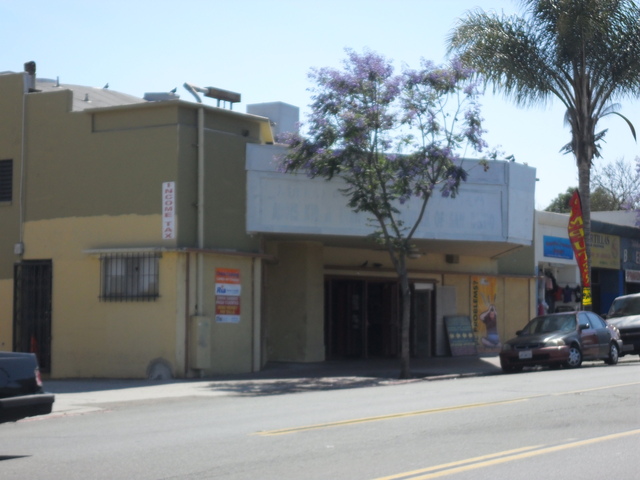 Opened as the Academy Theater and mentioned on the San Diego Historical Society website, built in 1925. Last internet record of operation is a brief mention from 1995 of vandalism shortly before the theater’s reopening as an MGM Amphitheater. It now serves as a ‘church’ operated by the Brazilian based Universal Church of the Kingdom of God (UCKG).

The loopnet listing is gone. The Google view shows the theater in bad shape. Here is a photo from better days in 1983:
http://tinyurl.com/d9p992

Not really an Amphitheater was it?

The “MGM Amphitheater” name was used briefly by some party unaffiliated with MGM (who clearly had no idea what an amphitheater is, either), in an apparent attempt to give the old Academy one last shot at being a performance venue before it became a church. About a year ago I passed by on my bike and took a look inside; the auditorium was cleaned up and repainted, with new seats (I hope), and was a Hispanic church at the time. Now it is a church with the name “Ebenezer” painted on the front of the building.

The Academy was operated for years by the Art Theater Guild, from some point in the ‘60s up until it shut down in the early 1990s. I’m fairly certain it was never affiliated with MGM (in the sense of Metro-Goldwyn-Mayer, anyway).

WED30JAM13, 8:05ACST The last movie I watched in this house was Tom Tryon’s “The Other” some time in 1972. I wish I could remember more about the place.

Academy Theatre. They had a premiere of the JANUS VERSION of “KING KONG”(in the late 1960’s, I believe, containing the original censored scenes, which had not been viewed since it’s original release in 1933,(plus, not forgetting the many edits made during each re-issue release); hence the version that’s out there today, containing the “outtakes”. The place was packed, as I recall…it was showing during the great revival of the classic film era, bolstered by the new FILM STUDIES courses DEBUTING IN COLLEGES at that time, thus allowing the public to actually VIEW the titles at local cinemas such as the ACADEMY. showings