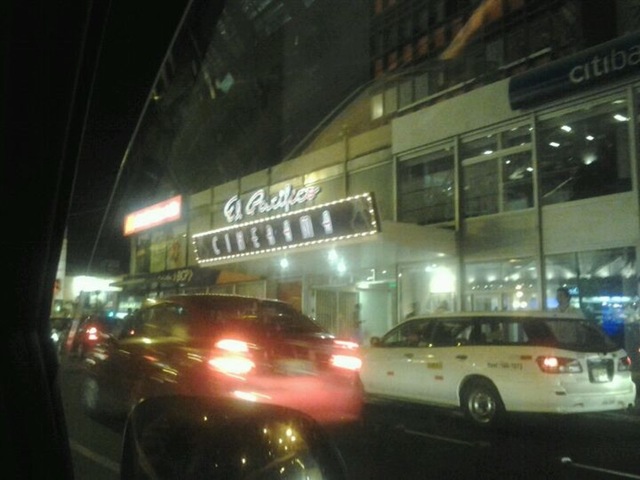 Located in the Miraflores district of Lima, the Cine El Pacifico was built in 1958 as a single screen movie theatre, with seating in orchestra and mezannine levels. It was the first in the city to be equipped with air conditioning.

Once operated by the Starvision chain, the Cine El Pacifico was gutted internally and converted into a multiscreen cinema in 1995. It was taken over by the Cinerama group in 2005.

Please e'mail any comments about this theather please
christian

Here’s the official website for Cinerama El Pacifico</a> and its two sister cinemas. Click on the “Nuestras Cines” link to see a couple of interior photos- though there are no captions to identify which of the three are depicted.

Here is a website featuring a more recent exterior photo of El Pacifico, and a longish text in Spanish which appears to be (at least in part) a review of the theatre. From what I can puzzle out with my very limited Spanish, it seems that El Pacifico was a large, single-screen house with balcony, which has been remodeled more than once to become the 12-screen multiplex it now is (I’d appreciate an English translation or paraphrase of those parts which are about the theatre itself.) Judging from its architectural style in the photo above, the place most likely dates from around the 1950s.

Thanks, Ken. I like the look of the building, being a fan of some (though certainly not all) midcentury modern design, and South America has some of the most interesting buildings in the style. This one I like especially, as it appears to fit into the streetscape, unlike many from the era.