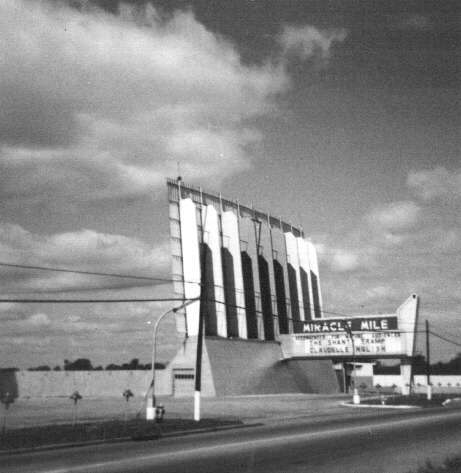 The Miracle Mile Drive-In opened on November 26, 1954 with Spencer Tracy in “Broken Lance” (in CinemaScope) and Walt Disney’s “Peter Pan”. The car capacity was 1,500 with an expansion planned for the following spring to bring the total capacity to 1,870 cars.. The CinemaScope screen was 60 feet high & 120 feet wide, with the screen tower built to withstand winds of up to 125 MPH. The projection booth was located 425 feet from the screen, which made it one of the longest projection throws in the country. The drive-in was also equipped with individual car heaters that plugged into the speaker pole, and they could be rented at the concession stand. In the late-1970’s, it ran all winter long with in car heaters Brrr…

It was built and owned by Glass Mill Drive-In Theater Inc. at a cost of $450,000.00. The Theater Operating Co. was the operator/management of the drive-in. Theater Corp. of America took over ownership in 1961. In 1963, it was sold to Redstone/National Amusements. It was twinned in May 1977, the screens were named red & blue, and if you parked by the fence in the center, you could watch both movies at once. In the 1980’s, the Miracle Mile Drive-In was famous for being one of the first with radio sound and for its having an awesome marquee.

This theater still had a playground up front and a four lane concession stand in the late-1970’s. It also had three ticket booths and large spike rows at the gates. In 1976, a ticket cost $1.25, and pay was $1.90 an hour for ticket sellers. We sold a full line of hot dogs, foot longs, burgers, pizzas, popcorn, icecream, candy and more. At one point, we got a new platter projection system. Soon after, we showed “The Blob” with the second reel spliced in backward. Because it was platter, we had to show the whole thing backward and then work very late in order to re-show it frontwards.

National Amusements closed the Miracle Mile Drive-In along with the Maumee Drive-In and Franklin Park Drive-In at the end of the 1986 season. It was later sold and demolished. A shopping center was built in its place, which now stands empty.

It was one of the dandy old classic drive-in theatres from Toledo, OH.

Here is a photo from the Toledo Public Library:
http://tinyurl.com/ysmz9m

This Drive-In opened on November 26th, 1954
It featured six entrance lanes for no waiting and no traffic jams and twelve exit lanes mean no tie-ups, no tiresome lines and no driving hazards. one of the best ads.
Grand opening ad at View link

There’s a story in the Aug/Sept 2010 Reminisce Magazine about a young married couple in 1951, going to the Telegraph Drive In. They won their honeymoon trip money in a Lucky License (plate) contest. I see no Telegraph or other Drive-In theatres listed in Toledo. Any clues as to where they were?

Yeah, they had In-car heat back in the early sixties too.BIG Jan 1 1960 Triple feature: “SAMSON AND DELILAH”,“CONQUEROR” and the western “OREGON TRAIL”.Kids Supervised on Playground!

Here’s a permanent link to a photo of the Miracle Mile, very unique marquee. The Telegraph page can be found here. The Toledo area also had the Franklin Park, Toledo, Starlite, Jesse James, Maumee, and Parkside (Sundance Kid) drive-ins. I’m looking for a short-lived “Butch Cassidy Drive-In” that was supposedly near Northwood, anyone know about this one?

Butch Cassidy Drive-in not listed in the 1956 Motion Picture Almanac.It had JESSE JAMES DRIVE-In Listed being owned by Armstrong.

Uploaded some pictures from the fire in Oct 1985. Pictures are courtesy of Harry Skrdla and Ron Gross. From the FB Speaker Post Page.