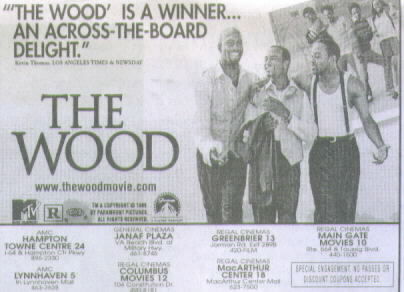 General Cinema was the chain for this theatre.

JANAF Shopping Center was built on property which had formerly been used as an airfield. The name JANAF (Joint Army Navy Air Force) is really an acronym for the original investment group that was composed of retired and active duty military (in a very military area). The shopping center opened in 1959.

About 1966 a single screen opened, then in 1980, three more screens were added, for a total of four screens.

In 1990, four more screens were added, bringing the total of screens to eight. In 2000, the theatre closed. The marquee read:

At least it closed with some class, some theatres never bother to put anything on their marquee when they close!

I lived in the Tidewater area in the 70s, and went to this theatre occasionally when it was a single screen. It was owned by General Cinema, and was one of their earliest (and unusual) layout schemes: i.e., there was no masking on the screen. GCC at that time liked the effect of what they called “shadowboxing” the projected picture. The plaster walls simply curved into the screen on the left and back out on the right. Aperture edges were all you got. Seats were the old “push-back” 2 position type, and not very comfortable. Still it did boffo biz back then. That area, with Military Circle across the street, used to be the hottest of the retail areas… anybody care to update me on what happened in that part of Norfolk?

As an update, the theater section of the JANAF shopping center was torn down to make way for an expansion to the Walmart next door. Not a bad trade since an modern multiplex operated by Cinemark opened across the street at Military Circle mall. Prior to that AMC shut down the small (4 screens, I think) indoor and 4 screen outdoor cinemas at the mall (which is now known as The Gallery at Military Circle)
The Janaf area is still expanding, with a recently expanded Walmart, BJ Wholesale shopping club. Montgomery Ward was converted into a shopping center upon that chain’s demise, a new shopping strip is being built next door.
Military Circle renovated to include the new cinema, a new Sears, and a new food court as part of an ownership change a couple of years back.

REGGIE3, If you live in the Tidewater Area, I wish you would please fill in any info you have on the Virginia Beach, Norfolk, Portsmouth, Newport News, etc theatres I have been and will be adding to this site. I’m doing this sorta by remote control from the Chicago area. Thanks, Bob Jensen

I worked for GCC for almost 29 years, and 16 of them as the GM of the Janaf Cinemas, so I need to correct the chronology of this one time wonderful theatre.

The original building was “twinned” in 1977, and 2 more theatres added, making it a four-plex.

Starting in 1986, and finishing in 1987, using the “Cambridge Seven” design, the original building was split again, this time across the middle, yielding 4 screens. The 2 theatres added in 1977 were remodeled, and 2 larger screens added bringing the total to 8 screens.

The entire lobby, and front were also remodeled at this time, leaving only the large “CINEMAS” sign on top of the building as a memory of it’s original existance.

It should be noted that I went to the Janaf as GM, hoping to only be there a short while, but fell in love with the theatre, the Tidewater area, and the people, and many times, even today, wish I had never left.

I returned to Norfolk (from Maryland), on the last night of operation, to say goodbye to many wonderful memories.

To all the many wonderful employees, and special friends I had in Tidewater, I thank you, and miss you.

Here is an October 2000 article from the Norfolk Virginian-Pilot:

Oct. 14—NORFOLK, Va.—As General Cinema heads for bankruptcy court, suffering from the same kind of financial trouble as its industry peers, the curtain will close on Norfolk’s Janaf Cinemas.

GC Cos. Inc., the corporate parent of General Cinema, said Wednesday that it will file to reorganize under Chapter 11, lining up behind United Artists Theatre Circuit, Edwards Theatres Circuit Inc. and Carmike Cinemas Inc., all of which have filed for bankruptcy in recent months.

General Cinema, like its industry peers, said oversaturation of the market created by a surge in the construction of megaplexes — theaters with stadium seating, state-of-the-art sound and more than 14 screens — has created intense competition.

The eight-screen, 34-year-old theater at Janaf Shopping Center will have its final showings Thursday evening, according to a source associated with General Cinema who declined to be identified. General Cinema has no other theaters in Hampton Roads. Janaf Cinemas is the third local theater to close in recent months

Lived in Norfolk as a kid and saw many great movies at JANAF. Never knew what “JANAF” meant until reading this listing. Among the movies I saw there: A re-release of “Star Wars”, “Rollercoaster” (in Sensurround), “Excalibur”, and “Porky’s”. LOVED going to the movies during those years!

Yeah,Bob you are right when my old theatres closed I was very close to putting almost the something on my old marquee at Columbia Square Cinemas or Columbia 1 and 2 theaters I could get to the letters easy,but decided not too. All they put was “CLOSED” and the “C” fell off over time.I got it.so it was"LOSED",Sad for a place that gave so much enjoyment.

Having grown up in Norfolk, I enjoyed many movies at the JANAF Cinema during the 1960’s and 1970’s. Recently I was in Norfolk, drove through JANAF and found their Public Library was the only remaining establishment/business from that era.

I worked at the JANAF Cinema in 1970-71 as usher, popcorn popper, maintenance guy…just about whatever needed doing. It was a blast, even though the pay was really poor. I did learn a great deal about the business, however, as we played many different types of films while I was there. From “flat” 35 film, like “Fantasia” to super cinemascope like “The Andromeda Strain.” I learned from the projectionists how the carbon arc-lamp projectors worked, how to changeout the lens for the different types of film (flat vs. anamorphic), and how to pop tons of popcorn. Other fun tasks included changing light bulbs in the theater (about 30 feet high) and cleaning up after Saturday matinees, which included everything served from the snack counter AND barf. I was sorry to see the cinema go to a multiplex, because I knew much of the charm of the single-feature theater was going with it. And, of course now, sorry to see it is all just a memory!

When I went to visit family in Norfolk, the Janaf was the place to watch films. Spent many enjoyable days with my cousins or my grandfather watching movies there.