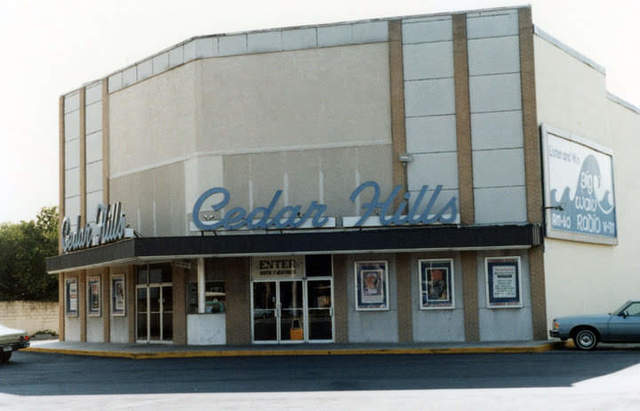 This was an Eastern Federal Theatre Corporation theatre when it closed. At the time showing second run. Believe it was a single that fell to the deadly twinvasion. Now a Bailey’s PowerHouse Gym that utilized the existing structure. By summer of 2020 it had become an auto-parts store.

I think that the only person to help you there would be vaughn at the roxy site.

Was the Cedar Hills once known as The Lake Shore Theatre then The Lake Shore Art (showing "nudie" films)? Both would be right around the same area (Blanding, Wilson and Cassat) but I can't find anyone who can tell me where the Lake Shore was so I'm assuming it's possible that it became Cedar Hills?

Samuel B. Jones has taken over management of the former Lake Shore Theatre in suburban Lake Shore from Maurice Magnan, who operated it on weekend dates as a conventional double-feature house. Now called the Lakeshore Art, the theatre has a completely new policy of catering to adults only. For its grand opening, the Lakeshore Art had a triple feature program of “World Without Shame”, “The Bellboy and the Playgirls”, and “The Topless Bikini”. The new admission price is $1.50, the same as for the local Roxy Follies, the only other nudie house in the area.

I wonder where this was? Or what it was.

I’m not sure where the Lakeshore Art was located, but it is not the same theatre as the Cedar Hills. In the ‘60’s thru at least the 70’s the Cedar Hills was (apparantly) owned by the same outfit that ran the Town and Country Theatre in Arlington on the other side of town. Both theatres generally had the same bill. They shared newspaper ads and their logos were the same. The last time I drove out Blanding Blvd. the Cedar Hills building was still there…though there was no remaining signage to identify it as the movie house it once was.

Lake Shore Theatre was across the Cedar Creek River from Cedar Hills Theatre…next to the Bowling Alley and Marina!

The old Cedar Hills Theatre in Jacksonville, (Duval County) Florida. This was another theater operated by Charlotte (NC) based Eastern Federal Corporation. It was built and operated by the H B Meiselman Theatre Circuit (Later to be Incorporated as Eastern Federal Corporation) as one of Jacksonville’s first suburban theaters, a single screen operation seating over 500, which also had a full theatrical stage in front of the screen. In the late 1970’s it was split in two, creating 2 separate 200 seat auditoriums. The interior pictures were taken shortly after the twinning. Eastern Federal operated five Indoor theatres and four Drive-In Theatres as well as several strip shopping centers in the Jacksonville area.

EFC had a theatre called the Royal Palm somewhere around Jacksonville as best I can recall that was one of their most profitable locations in the 70’s. Anybody know what its last name was?

Rstewart: The Royal Palm Theatre became the Atlantic Theatre and is listed on Cinema Treasures #17397 under that name, located in Atlantic Beach, FL

Thanks, I knew it had change names. At one point it was re-seated and the old seats found their way to Cobb Cinema in Smyrna, GA. EFC brought a manger up from there to launch their Tripling of the Town & Country in Marietta, Ga (late 80/early 81?), I think with the hope he might bring some magic along with him. By then no amount of splitting existing locations could keep EFC in stride with all of the other operators in Metro Atlanta.

The Cedar Hills Theatre has now morphed into an Advance Auto Parts.