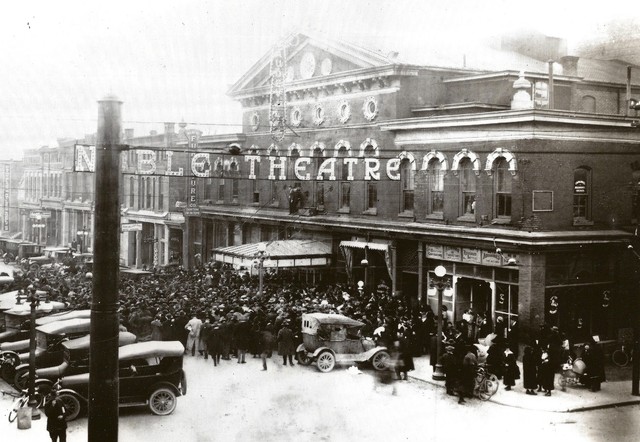 The Noble Theatre opened in 1883 as the Opera House. It was one of the most ornate and distinctive performance halls in the Southeast. During the early-1900’s the theatre transitioned from a live performance venue to a cinema and was renamed the New Noble Theatre. In 1909 it was expanded to the plans of an architect named Oakley, form Montgomery, AL. By the early-1940’s it was operated by Paramount Picture Inc. through their subsidiary Wilby-Kinsey. The theatre was demolished in 1958.

Here and here are a couple of vintage photos of the Noble Theatre.

BACK IN 1958 THE NOBLE THEATRE WAS REOPENED, IT WAS CALLED THE NEW NOBLE THEATRE. IT WAS RUN BY MY SISTER AND HER HUSBAND(BOB GILES). THEY SHOWED MOVIES AND HAD LIVE STAGE SHOWS. PRO. BACKWARDS , BETTY GRABLES HUSBAND AND HIS BAND, A CIRCUS, AND OTHER STAGE PERFORMERS. MAE WEST HAD APPEARED ON STAGE IN THE 30’S. THE THEATRE WAS TORN DOWN AROUND 1970.I THINK IT SHOULD HAVE BEEN RESTORED. IT WAS THE OLDEST THEATRE IN ANNISTON AND WOULD HAVE BEEN A GREAT ATTRACTION!

The Noble Street Theatre began as an upstairs theater, but was rebuilt and expanded as a ground-floor house in 1909. The July 14 issue of The American Architect had this item:

“ANNISTON.-Architect Oakley, Montgomery, has prepared plans for the renovation of the Noble Street Theater so as to make it a ground floor theater.”

Editons of the Cahn guide starting in 1909-1910 listed the house as the New Noble Theatre. I haven’t found it listed in earlier Cahn guides. I’ve also been unable to find a first name for architect Oakley, and the only other project I can find on the Internet that was attributed to him is the Bijou Theatre in Knoxville, Tennessee, also built in 1909.