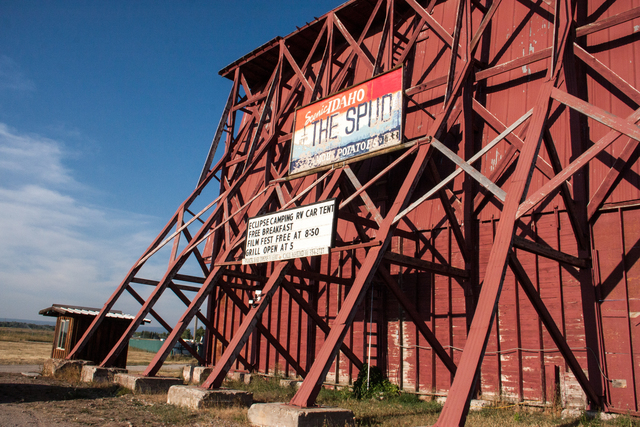 The Spud Drive-In is an old fashion drive-in theater where you can watch a movie in the shadow of the Teton Mountains. The theater opened on July 3, 1953 with a capacity of 76 cars. The current owners, Richard and Dawnelle Wood, bought it from Leo and Gladys Davis in 1987.

The drive-in theater, which has always been known as the Spud, has a unique marquee - a giant potato on a flatbed truck. The Woods had seen postcards with the a huge potato on a semi and thought it would be fun to duplicate it, only smaller – since they raise seed potatoes in Teton Valley and seed potatoes are small. They looked for rocks that would work, but there was the problem of accessing and moving it. Then Richard found an ad in the paper that read Ugly Old Truck, runs well. Sure enough it was ugly. They brought it home and gave it a new paint job. A friend, Larry Hull, helped build the spud. They blew insulation on a wood frame and then covered it in cement. It’s unbelievable how many pictures are taken of that ugly old truck and its potato.

A storm in early-April 2022 blew the screen down. Repairs are being considered for a 2023 reopening.

A article from PreservationNationBlog: Anyone who owns — or has tried to buy — a camera any time in the past 10 years knows that digital photography has replaced film almost entirely. This transformation has not been limited to still pictures; digital is now king at the movies, too, which has created challenges at many older movie theaters.

The Spud Drive-In in Driggs, Idaho, is no exception. The theater, which opened in 1953 (and celebrates its 60th birthday this week) has long been a beloved part of the community, but has faced closure twice in recent years — first from management changes, and then from the transition to digital projection.

Local fans rallied with Facebook outreach that reached thousands, and to date enough “Save the Spud” t-shirts have been sold to cover half the cost of a new digital projector. (They’re still available — get ‘em while they’re hot!)

When asked about the transition, the Spud’s manager (and former co-owner) Dawnelle Mangum found both pluses and minuses to the change. On the upside, the new projector’s bulb, at 6,000 watts, is twice as powerful as its predecessor, allowing them to start movies 10 minutes earlier. She says that “10 minutes is big — 9:40 as opposed to 9:50 for our longest day.”

The trade-off, Mangum says, is in the frequent updates the projector requires (which she says are fairly equivalent to a typical computer) and the life expectancy of the new machine.

“The projector we replaced for hummed along for well over 60 years,” she says. “It was purchased used in 1953. No digital projector has that kind of life expectancy.”

Saving the Spud as a drive-in theater has also preserved one of its most beloved attractions: a giant potato on the back of a truck, which Roadside America calls “a novelty postcard come to life in three dimensions.” And indeed, Mangum and her former husband — who designed and built the potato and set it on the back of a 1946 flat bed truck in 1990 — were inspired by classic postcards.

She takes great pride in its ongoing appeal: “People in the valley claim that more pictures are taken of the truck with the potato on it than the Teton Mountains here on the west of our valley.”

Mangum and fans of the Spud are planning a big celebration for the drive-in’s birthday this week, featuring hula hoops and slinkies (two other American icons that arrived on the scene in 1953). And thanks to those devoted fans, the Spud has many more birthdays to come.

A 2013 article in the Jackson Hole (WY) News & Guide listed the ownership timeline as:

Wydaho Group LLC ran the Spud for a single season in 2010 and announced in May 2011 that the business would close.

“Dawnelle Mangum, who with former husband Richard Wood ran the drive-in from 1987 to 2009, negotiated to lease the theater from Wydaho Group and operate it with partner Tyler Hammond, co-owner of a towing company and auto body shop in Driggs.”

Also, the Spud is listed on the National Register of Historic Sites and the Idaho State Historic Registry.

Also, a March 2015 article in the Teton Valley News said that when the folks who raised money for a digital projector left the Spud, they took the projector with them. A new one was on its way, but that speaks to unsettled management.

One more note. The Lubbock Avalanche-Journal wrote in April 2011 that “The very first drive-in to go digital was the Spud Drive-In in Driggs, Idaho — opening Despicable Me and Robin Hood as its first digital features in July 2010.” It quoted interviews with “Keith Zednick, Spud chief operating officer” in BoxOffice and at DriveInFilmFestival.com.

That lines up with the year that Wydaho Group ran the Spud, but came before 2013’s Save The Spud fundraisers to get a digital projector. If the Spud currently has the projector that was on its way in March 2015, that would mean it has used three different digital projectors in the past seven years. Pretty wild for a tiny little drive-in!

Yesterday I made my second visit to this drive in. Ownership has changed and the condition of the facility has declined some, but it is much the same as it was when I first visited here 24 years ago. Most of the theaters that I was working in during 1994 are closed and in the landfill. I did not get to see a movie since they are weekend only this time of year and will be closing for the season in a couple of weeks.

Jay, the person in charge, was busy with other duties around the property that did not concern movies as they offer rental cabins to tourists who come to this pretty fishing and skiing area on the west side of the Grand Tetons. We did not have much time to talk, but he was very friendly and let me into the Snack Bar for a close up look at the operation. He said they run a full time schedule during the summer so hopefully this place will continue to entertain the residents and visitors to Teton County Idaho for years to come.

There are many pictures already in the photo section here but I added a couple of better shots of the interesting Snack Bar decoration plus a couple showing areas not in the previous pictures.

There is also a Big Potato in Robertson, New South Wales, Australia.

Do they serve potato chips in the snack bar(lol)?

It has been a rough winter for the Spud. Late last year, during one of the first snowfalls a vehicle left the main road in front of the drive in and smashed into the truck with the giant potato on the flatbed that was parked at the driveway entrance. (Pictures of the truck and giant spud can be found in the photo section.) The offending vehicle left the scene leaving the theater owners to foot the repair bill.

Then, earlier this week a late season storm blew through the area and toppled the screen. The wind was from the west so it blew the screen to the east onto the parking field. According to the owner the screen, which is a total loss was insured. She said they will rebuild and hope to be open for the summer season starting the first week of June, as usual.

Good luck with that. I hope she is right as I had planned for another visit this summer, but given the current situation with construction materials and labor, June 2023 might be a more realistic target. Maybe they can erect a temporary replacement or perhaps even a blow up screen until repairs are complete. Fortunately, the overhead picture indicates that the screen just blew over face first onto the field and did not damage the snack bar or reach any of the rental houses that line the back perimeter.

As expected, the drive in will not be ready to open this summer as had been hoped. The same supply chain and labor issues that are affecting construction nationwide have made this an impossible dream. As the drive in typically closes its season around Labor Day, that means the new target is summer 2023. According to their FB page there is also the need to update the 70 year old blueprints to modern building codes.

If you are interested, there are pictures of the original blueprints on the FB page. In the photo section here there is an overhead picture of the screen laying face first on the snow covered field following the storm.

That sucks but at least they plan to rebuild and renovate instead of just closing.