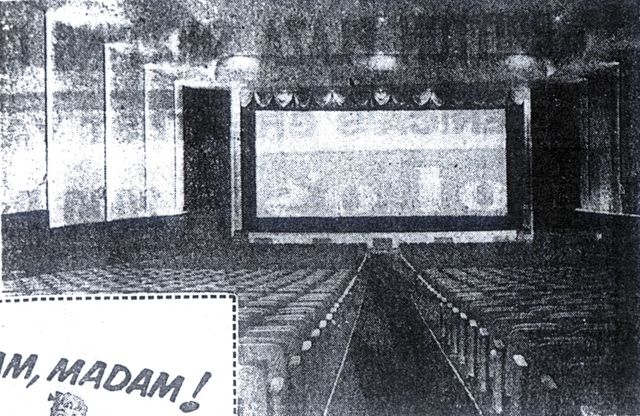 I just checked today’s schedule. Four features are listed: Jungle Book, The Huntsman, Barbershop, and Batman vs. Superman. So only 4 auditoriums are active. There are 67 reviews on Google for the Britton. Surprisingly the good reviews far outweigh the bad. Maybe they’ve made some improvements. Regardless I still have no desire to visit.

This reopened as Britton 8 on November 25th, 1992. Grand opening ad in the photo section.

Website is down. Phone disconnected. Current phone is 813-839-1600. You will get ahold of someone who works there and can tell you what movies are playing. They do have a Facebook page but no movie times on it. Best to use Fandango or Moviephone to find out what is playing.

They are listing movies on fandango, BUT that can be ghost times, or times that were published before the theater decided to close.. it is bound to happen SOON..considering there are 4 movies playing in 3 auditoriums, and this has been practice for the last year…

It’s official now. The Britton is history. A Google search now lists the theatre as permanently closed. Today I drove past Britton Plaza and the theatre signage facing Dale Mabry has been completely re-purposed from Britton Cinema to Radiant Church. Not sure when the change was made as it’s been at least a year since I was in the area.

A couple years ago they were still running movies occasionally but only on one screen and only in the evening. Titles were not advertised anywhere so you’d have to call and hope someone would answer. The Britton had a great memorable run as a large and beautiful single-screen house from 1956 through 1972. RIP Britton.

When that theater was converted to a 8 plex it became history. When I originally moved to Tampa in 83 it was 3 theaters. The 92 remodel was horrible. They divided the balcony into tiny theaters that held maybe 15 people. It was a terrible experience

When the Britton was triplexed it was bad enough although somewhat acceptable. The one large auditorium at the front held a capacity of about 900. At least the side walls and proscenium remained untouched from their original design with the exception of a smaller screen. The two small theaters from midpoint of the auditorium to the rear held about 400 apiece and each one had a balcony. A dividing wall down the center of the balcony gave the two smaller theaters some additional seating. At the time this was thought to be a first in multiplex design…mini theaters with a balcony.

The 8-plex renovation completely destroyed the interior. I shouldn’t have gone but I was curious to see the layout and yes, it was terrible. After checking out several tiny screening rooms I had enough and walked out.

The Britton was originally equipped with 70mm projection. Two big attractions that played in 70mm were Around the World in 80 Days and South Pacific.

I went there once on vacation when Regal Cinemas had it, I remember being in a auditorium down the long hallway on the left. Unfortunately didn’t get the seating of each screen. That house I was in, the screen was OK, not bad to orher locations