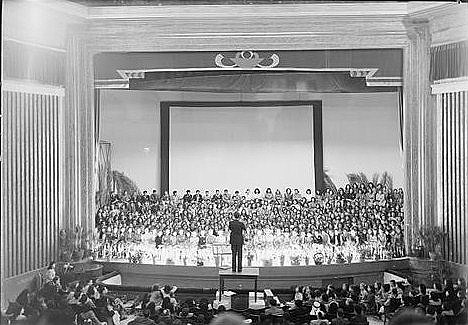 Located in the South Tel-Aviv district of Yafo (Jaffa), the Alhambra Cinema was opened in 1937, and was designed by Lebanese architect Elias Al-Mor.

After the establishment of the State of Israel and the imposition of military rule, the Alhambra Cinema was taken over by Israelis and was re-named Yafo Cinema. It continued to operate as a cinema until 1963.

The building was then converted into a live theatre, and the stage was extended at the rear. This use ceased many years ago and the building became derelict, with only the entrance in use as a bank until 2007.

It was purchased by the Church of Scientology in 2010, and after a two years perior of renovation, was opened in August 2012 as the Ideal Center of Scientology for the Middle East.

Very interesting – not illustrated in the two books I have about interwar Tel Aviv! Anybody know if it still exists?

The building is still standing, but very dilapidated. You can still the Alhambra sign on the tower. The frontage is occupied by a branch of the Israel Discount Bank.

Have found old picture of Theatre during better times..

It has been converted to a Scientology Center: View article