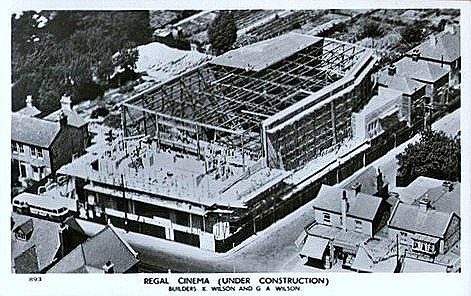 Located in Parkstone, near Poole, Dorset, on the corner of Ashley Road and Jubilee Road. This was originally the site of the Victory Palace Cinema which was opened in 1920, and was closed in February 1935 and demolished. The Regal Cinema opened on 18th September 1935 with Anna Neagle in “Peg of Old Drury”. This beautiful Art Deco cinema was also equipped with a café.

For a suburb of both Bournemouth and Poole, this was a very grand cinema indeed. With wooden panels along the side and beautiful proscenium lighting this cinema evoked everything that post war Britain needed to clear the gloom.

I saw “Moby Dick” with Gregory Peck here and “Journey to The Centre of the Earth” with Pat Boone. This was also my Saturday morning children’s club as a small boy. For six old pence (2.5 new pence) You got a feature film, the news, cartoons and a serial. Great value!

The Regal closed on 12th October 1963 with Frank Sinatra in “Come Blow Your Horn” and was demolished shortly afterwards to make way for two retail units.

The Regal was equipped for the showing of 3D films during that short-lived craze in the early fifties. One of the pictures shown successfully in 1953 was House Of Wax starring Vincent Price.

Not long after The Regal shown The House Of Wax.My father took me to the Regal as it was our local,i was 10yrs old.The movie was another 3D called Charge At Feather River, Staring Guy Madison.We were given carboad 3D Glasses WITH RED & GREEN plastic in the frame.As the arrows thundered out the screen, you would duck and crash your head into the seatin front of you.I think this is why The 3D did not last to long as you were getting hurt.At the age of 14yrs i left school and got my first job as a trainee projectionest, at the near by Grand Cinema Westbourne.The Grand only opened from Spring through till Autum.I was then going to be out of a job.My luck was in i was given a temp job at The Regal Parkstone as a trinee projectionest till the spring.The first film showing on mt first day was The Diary Of Ann Frank.i remember i had to wear cotton cloves when i rewound the reels as there was a magnetic sound track down one side of the film,that you could not damage.this was for the Stero Sound in the cinema that The Regal was proud to be the first.Who would had thought that i would have ever gone to work at the Regal.Looking back at the sat morning show when we left reel out of the main movie to get the kids out dead on 12am.they must have done that in the days that i was Sat every saturday morning for 6d cheak of it.Flash Gordon was the Serial of the day.
regards.
Edwardo

Does anyone know where I can obtain pictures of this cinema?

I have found a website about a man called Peter Dyson who was deeply involved with the Regal Parkstone and other local picture palaces. A real find, for me at least.

This is the HTML.

The cinema was actually located where the Iceland supermarket and Coral betting buildings now stand.

Back in the 60s I was working at The Grand Cinema Poole Road Westborne as a traniee projectionist.Back Then the Grand Cinema Used to Close from the end of October until the following spring. I was fortunate that my manager is able to get Mr. Bravery Owner of the Regal Cinema Parkstone, to offer a position for me doing the same job as a trainee projectionist. I would work at the Regal each winter through until the following spring. At that time Mr. Peter Dyson, was also working as a projectionist. I had Many Happy Times at the Regal my best moments was being involved with the morning matinees, The Regal Would Be allways full on a Saturday morning, it would cost you 6d for the stalls and 9d for the circle. Ice Cream Was sold in cardboard tubs with a small wooden spoon priced 6d. Kiora Was 1/–. I can remember that the chief projectionist was very knowledgeable in his job and tought me much. The third projectionist whose name was David who I became very good friends with I Do Have a Photo of the Regal. Regards. Edwardo.

I am desperate to get hold of any pictures of this cinema. Please let me know if you can help at

I have managed to get hold of some pictures of this cinema but they are not great quality. If you have pictures I would love to hear from you.