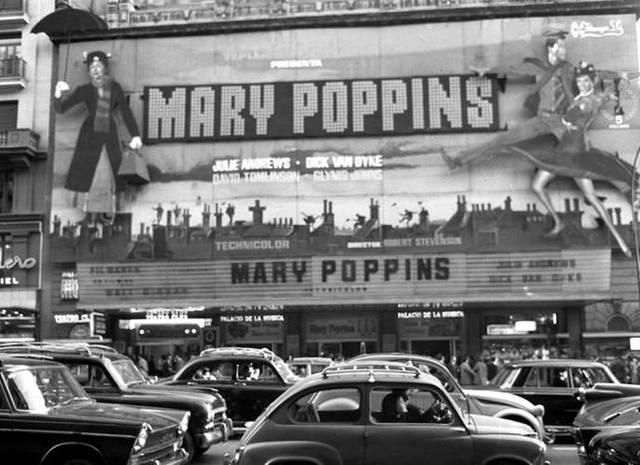 The Cine Palacio de la Musica (Cinema of the Palace of Music) was built between 1924 and 1926 in a blend of historic styles including Classical, Baroque and more modern. It was especially inspired by the Seville Baroque as the architect had visited a hospital in Saville in that style. The exterior columns were inspired by Italian garden and palace architecture.

The Palacio de la Musica was built for the ‘Society de Autores General de Espana’ (SAGE) under that name and was renamed the Palacio de la Musica in 1928. Consideration was made of the opening with the Symphony Orchestra of Madrid in 1925, but work on the building continued, and incorporated Art Deco details which were then becoming ‘in fashion’ due to the 1925 Paris Exposition. It was designed by famous architect Secundino Zuazo Ugalde as a dual- purpose cine/concert hall with a community ballroom in the basement and a roof outdoor summer cinema, but due to construction problems, the outdoor cinema was eliminated from the plans.

On November 13, 1926, the Palacio de la Musica was opened by King Alphonso XIII, the First Congress of Urbanism and with the orchestra conducted by maestro Lasalle. The film “The American Venus” was screened the next day, with maestro Lasalle conducting the music. There was a solid band-stand built at the rear of the stage (as at the Hollywood Bowl, Hollywood, USA) and when films were shown, the screen was lowered just behind the proscenium at the front of the stage. It became a full time cinema in the mid-1950’s.

Originally as a single screen the seating capacity was 1,868 located in stalls and two balconies, with two pairs of side boxes located at each side of the fronts of the balconies. The projection box is located at the rear of the lower balcony. The entire building is a marvelous example of Spanish Moorish decoration.

In 1966 the original architect re-furbished the main floor.

In 1983, the architect Enrique Lopez Izquierdo Camino renovated the basement community ballroom into two more auditoriums seating 468 and 241. The main auditorium is intact with 1,722 seats.

In March 2006 it was announced that the Cine Palacio de la Musica was to close and the interior would become a shopping mall. The adjacent Cine Avenida was closed in 2007, and beyond its landmarked facade, retail was installed there. The Cine Palacio de la Musica closed as a cinema on 22nd June 2008, but plans changed, and from December 2008 to January 2013 work, including restoration of the facade occurred, so that the Cine Palacio de la Musica would be reused as a concert hall. Incredibly, despite all the renovation already done for this important historic landmark, due to economic circumstances, as of 2013, it is once again proposed to become retail. There is a petition drive underway that it should be restored as a concert hall and resume a cultural heritage use rather than become another shopping opportunity.

Listed in todays Variety as having hosted the Spanish premier of SPIDER-MAN 3, so it is still going!

This was the World Premier home of Marisol (Pepa Flores) movies during the sixties. She was one of Spainish cinema’s biggest box office draws ever and is now retired.

When I saw a movie a decade ago, it was an awesome single screen with 2 balcony theater, with 1750 seats. The other 2 screens were present, but not carved from the main auditorium.

here’s some photos of wonderful exterior & even one of the gloriously ornate auditorium.

2007 photo of Auditorium, orchestra, facing curtained screen with side view, too:
View link

My notes from October 17, 1997 seeing Spanish director Almodovar’s “Carne Tremula” (Live Flesh) which was set in Madrid, are for main floor, 22 rows of 19 seats, aisle, 19 seats, and two balconies, with total of 1750 seats.
I estimated the screen was 50 feet wide. There was a red curtain in front of the screen.
The auditorium was very handsome with a huge backlit grill above the screen and a dome at the center of the ceiling.
Two additional screens were in the basement.
It would be a shame if the main cinema ceased to be a cinema! And, if the interior were gutted, that would be even more terrible.

There’s footage inside the auditorium from the “Sweeney Todd” premere in 2008 at this link: http://www.youtube.com/watch?v=0VHsh6PGd14