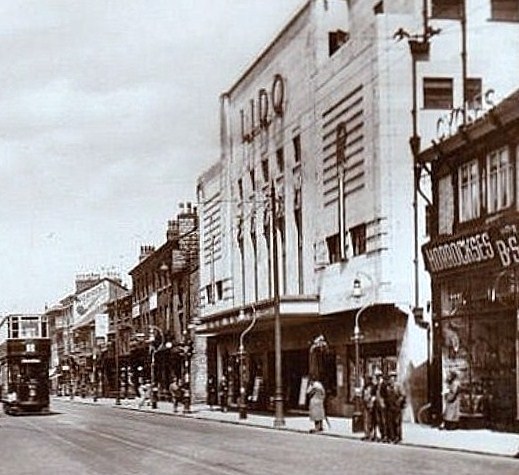 The Lido Cinema opened as an independent by John Buckley Theatres Ltd. on 27th March 1937 with Jesse Matthews in “Evergreen”. Reginald Liversidge opened the Christie 3Manual/9Rank theatre organ, whilst on-stage was Victor Snelson and his orchestra.

The cinema was built for both film and live stage use and the proscenium opening was 40 feet wide with a stage 23 feet deep. There were nine dressing rooms and other facilities included a café and restaurant.

A feature of the Art Deco style auditorium was a painted mural of a Venetian scene in a panel over the proscenium arch. During the 1940’s regular variety shows were staged as well as well as film programmes, and for several years an annual pantomime took to the stage. Laurel and Hardy performed here in 1947, and the building survived three fires in 1947 and 1949.

In 1962 the Lido Cinema was sold to the Leeds based Star Cinemas circuit and went over to bingo use, but this didn’t last long. There were plans to convert the circle into a cinema, but these never materialised and in 1963 it became the Lido Casino. In June 1963 it returned to film use as the Studio Cinema. In 1970 the former café was converted into a 90 seat cinema, known as Studio 2.

It was briefly re-named ABC Cinema and closed on 22nd January 1998 with a special screening of “Casablanca” staring Humphry Bogart. It lay empty and boarded up until demolition came in March 2006. A block of flats known as the Picture House was built on the site.

An exterior photo whilst still operating as a cinema here:–

“ . . the Lido in Bradshawgate, as unprepossessing and unVenetian building as could be imagined despite its gondola-filled proscenium frieze… it was little more than a cheap shell. The foyer was bare and cramped, and the centre stalls were by crash doors which opened from the auditorium straight out into the side alleys, sometimes drenching the adjacent customers in rain or snow… . the Lido was . . the proud possessor of a Christie organ, and the interlude for this could stretch the gap between solid celluloid items to as much as thirty-five minutes. Though it had the advantage of a phantom piano attachment, the Lido organ did not rise from the orchestra pit, nor did it change colour as it came. From some of the side seats you could see it waiting in the wings throughout the performance, and since the main curtain hung slightly short, front stalls patrons could count the feet of the men who pushed it on stage at the appropriate moment.”

Seats In All Parts: by Leslie Halliwell