Opened as Cinema I & II on April 2, 1969 as a twin screen theatre with 1,000-seats and 500-seats. The opening movies were Steve McQueen in “Bullet” & Leonard Whiting in “Romeo and Juliet”. This later became an eight-screen venue housed within two buildings of The Montclair Plaza on Monte Vista Avenue adjacent to the Freeway 10. The front building had three screens; the rear structure had five. Although two parts of the same venue, the front screens were of a different style than those in the rear–which strongly resembled the Woodland Hills GCC (possibly built around the same time).

As far back as 1983, “The Rocky Horror Picture Show” had weekly screenings here. But with increased competition from newer, flashy megaplexes nearby (like AMC’s Ontario Mills), this venue began to steadily lose business in the 1990’s, its final decade of operation. In 1995, the front screens were closed and that building subsequently torn down. The rear screens continued operations through the late-1990’s, but were eventually reduced to showing second-run films as its support from the General Cinemas chain got pulled.

As an independent venue, it remained open up until August 2000, which is when it ceased operations as a movie theatre.

“The Rocketeer” was presented at the Montclair GCC Cinema in 35mm Dolby Stereo beginning on Friday June 21, 1991.

I worked at the Montclair Cinema from the summer of 1969 to 1975. Started off as an usher and shortly moved up to Chief of Staff. Then there were 2 houses, one was 1000 seats and the other was 500 seats. I remember that the theater, which had opened a few weeks before I was hired, was showing Bullit and Romeo & Juliet. The first manager was James Polydorus. Lots of great memories were had in this place. So sad that it no longer exists.

Los Angeles Times once listed the theatre in its independent theatre section as shown by the photo in the photo section.

Man I remember coming to this theater as a kid along with UA 6 on central.

Added a May 30,1969 ad for a special weeklong showing of the classic first Oscar winner for Best Picture. 1927’s “Wings”. 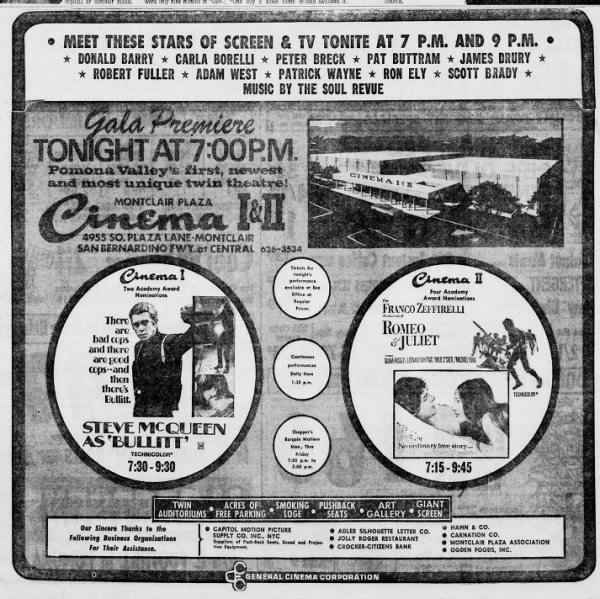