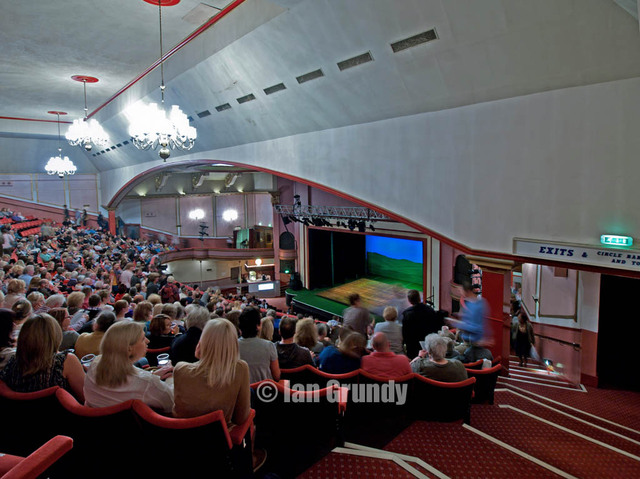 A vast cinema on the seafront, catering to both residents and tourists. In January 2014 when it was closed, this was the largest single screen cinema in the U.K. still showing films, although live shows were also part of the programming.

Built for William Catlin and operated by Catlin (Scarborough) Entertainments Ltd., the Futurist Super Cinema opened 27th June 1921 to the design of Scarborough architect Frank A. Tugwell as a cine-variety theatre. It was equipped with an Abbott & Smith 3Manual organ with 45 stops which was opened by organist Horace Shepherd. Stage use was every Sunday plus some other dates. Several notable live attractions were presented on the stage. Sunday 2nd October 1921 the Band of the Coldstream Guards performed at 3:00pm and 8:00pm. Rather surprisingly on Christmas Day 1921 there was a concert at 8:15pm featuring ‘carols, organ solos, and orchestral items’, and featured a full on-stage chorus. Friday 18th November 1927 Anna Pavlova, Laurent Novikoff and the Corps de Ballet from the Royal Opera House, Covent Garden, London performed “An Evening of Ballet” to great success. In late-1929 the Futurist Super Cinema was equipped with a Western Electric(WE) sound system. In 1954 it was equipped with CinemaScope and the screen was 38 feet wide.

On 8th November 1957 plans, drawn up by Capt. J.H. Ritson, were approved to radically redesign the stage. It involved extending the stage 4 feet into the auditorium, and adding additional dressing rooms onto the roof of the Arcadia/Palladium next door. The Abbott & Smith organ was to be removed as part of the plans. However work did not begin until September 1958 after the twice nightly Summer production, “The Cyril Stapleton Band Show” had ended - presented on the original stage. The work over the winter of 1958/1959 over-ran to such an extent that “The Big Show” featuring Cyril Stapleton and Frankie Howard had only one on-stage rehearsal before opening on 13th June 1959. In the final weeks Plaxtons Builders were employed 24 hours a day to complete the theatre. At this point films were discontinued.

In the Winter of 1966/1967 the stage was again extended, this time at the rear (and into space formerly occupied by the Arcadia/Palladium auditorium), giving an additional 15 feet depth and a high stage tower. The architects were Cassidy, Farrington & Dennys. Films returned outside the main season with Robert Shaw in “Custer of the West” utilising the newly installed Todd-AO system in May 1968. At this time the balcony above the circle was added, giving a comfortable capacity of 2,155 seats, reduced down from the original 2,393.

In the Spring of 1969 a facelift, prior to the start of the “Black & White Minstrel Show” Summer attraction, mistakenly covered up the original decorative white faience tiles on the façade with plain yellow cladding.

The auditorium has a barn like interior with the balcony supported on 12 slender columns with 6 large boxes above and behind the balcony. The balcony front is lyre shaped and returned to the proscenium wall.

The ceiling is divided into 2 parts. The front section is original with an elliptical dome containing 3 ornamental ventilation grilles and having concealed lighting around the rim. Three ornamental corbels each side ‘support’ the ceiling.

The rear section is higher and plain dating from the time the auditorium was extended in 1968. The proscenium arch is not original, is rectangular and rather plain.

The Futurist Theatre presented summer seasons of live shows, with big name concerts during the rest of the year.

When there was no live entertainment then films were screened (most of the Sept-June period) although the theatre was never remotely full to capacity for a film!

The future of the Futurist Theatre was largely in doubt for several years, and the theatre was closed by Scarborough Borough Council on 5th January 2014 with “Hobbit II - The Desolation of Smaug”. There were determined efforts to obtain a listed status which were supported by townspeople, the Theatres Trust and the Cinema Theatre Association, but listing was denied. Stripping out of the building began in March 2012 but was halted amid protests. Finally Scarborough Borough Council got their way by just 1 vote and demolition finally got under way in the Summer of 2018 - at a cost of £4.2 million. There are no presented plans for any replacement attraction on the site.

A 1989 shot of the exterior here, when all the cladding tiles were the same colour and the other businesses in the block were up and running!

A seafront theatre is to close while attempts are made to find a new operator for the site, a North Yorkshire council has confirmed.

Scarborough’s Futurist is to be boarded up after the borough council rejected plans to more than double its subsidy to the site’s operator to £180,000.

Conservative council leader Tom Fox said the theatre’s viability had not been established.

The Save Our Futurist group said there was “absolute anger” at the decision.

Built in 1921, the Futurist has staged concerts, shows and films but is located within an area earmarked for redevelopment.

‘Beyond refurbishment’ It was bought by Scarborough Council in 1985 and has been leased to its current operators, Brenda and Barrie Stead, since 2002 with that lease set to expire at the end of 2013.

In June, a report found the theatre was “beyond the point” of refurbishment.

Tom Fox Tom Fox said he expected the council to be “thorough” in ensuring the theatre remained secure A council report recommended either increasing the subsidy paid to the Steads or boarding the theatre up for three months, at a cost of £5,000, “to provide time to flush out any potential operators”.

It added that if a suitable offer was not forthcoming council officers would be instructed to “formally close the Futurist Theatre”, at a further of cost of £20,000.

Mr Fox said he expected Scarborough Borough Council to “be thorough in managing the integrity and security of the building and remaining facilities” while it was mothballed.

The current operator’s lease will, however, be extended until 5 January to permit the continued screening of The Hobbit, Mr Fox added.

Patricia David, from the Save Our Futurist Group, said it was “totally unrealistic” to expect another potential operator to come forward.

“Three months is not enough time to get together a business plan, find funding and start to book acts for the coming year.

The Futurist was closed by Scarborough Borough Council – the decision of one man, not even the full council – on Sunday 5th January 2013 with a performance of The Hobbit II – The Desolation of Smaug.

They have been wanting to close the theatre for over a decade, looks like they may finally have got their wish.

A post on a Facebook page and in the local press report that the local clowncil have voted to demolish this theater.

Demolition plans confirmed. The secretary of state has refused to call in the decision, so £4 million is to be spent on the demolition, which will take around a year. A deeply unpopular decision, especially since the replacement attraction looks like it will be rather naff. What on earth is going on in Scarborough?

Crap Council – really pleased we have got out of the town TBH.

Stripping out has now begun so it looks like the end. Demolition is set to take more than a year because the building is set into a cliff face with houses above. In fact, the whole operation is set to cost £4million, which would have gone a long way towards restoration instead, but it wasn’t to be.

A video on the Facebook page shows the building being demolished. An utter disgrace .

Some recent pictures on the Facebook page show the on going demolition.. ALL the fixtures and fittings are still in there, nothing appears to have been removed . A total disgrace.

Demolition now sadly well underway – costing £4.2 million – just shy of the Futurists Centenary. Had this money been put into refurbishing the venue the town would have a world-class iconic seafront attraction, but Scarborough Borough Council are an utter disgrace. Some photos of the remains coming down here:–