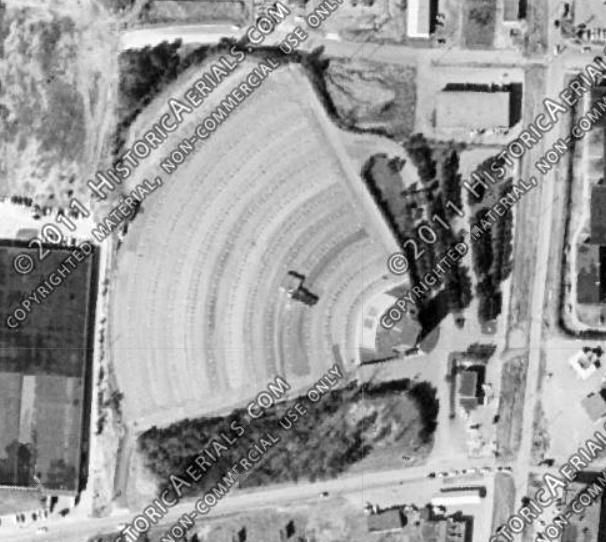 This was the second Parking Palace to open in Atlanta, opening on September 29, 1936. It was located on Piedmont Road NE at Lindbergh Drive NE and was closed in 1942 due to wartime conditions. It was refurbished and reopened as the Piedmont Drive-In on September 10, 1947. This was not a drive-in theater that was glitzy or glamorous. It was pretty much a working-class theater, with a great concession stand. There was a kiddie section almost right below the screen, where the parents would escort us so they could have peace and quiet in the car. They would retrieve us at the end of the movie.

Later, it was a favorite place to take dates for obvious reasons. On weekends, the theatre hired an off-duty policeman to walk up and down the rows of cars, shining his flashlight in, and cautioning couples to keep their heads above the seat. The Piedmont Drive-In was closed in 1967.

The flea market was there..I still have a framed picture hanging up that I bought there. The Zestos is now closed at this location. Bennie’s Shoes was there for years. There was never a Richway to my knowledge, but there was a K-mart, the Screening Room and the Great Southeastern. In the back of the plaza pre-1975 was a children’s amusement part called Kiddie Land. I do remember GEX, but I don’t remember it being at Broadview/Lindburgh Plaza, but off I-85 closer to Spaghetti Junction. I think the building may even still be there.

I went to the Screening Room a great deal, but the drive in was before my time.

Based on further comments, I think that it is safe to say that when the drive in was demolished it was followed by Arlans (a K-Mart style discount store), then the building was used as the flea market, then torn down for the Lindberg MARTA station. The Hastings Nursery was always at the northwest corner of the Cheshire Bridge, Lindberg, LaVista intersection across the street from the now closed up Varsity Jr. Hastings later moved to Brookhaven across the street from the Cherokee Plaza but is now closed.

The Kiddie Land at Broadview Plaza was gone by the time my family moved to Atlanta but I remember the K-Mart well as it was the first two story discount store I had ever seen. It had a good layout as all of the yard, garden, and hardware was on the ground floor which opened to the back parking lot and allowed close up parking since most people parked in front in the Piedmont lot.

The GEX store mentioned in a previous comment was located on the I-85 access road between Shallowford Road and the old North 85 Drive In. The Richway store also mentioned above was located on North Druid Hills Road across from Briarcliff High School and almost next door to the old Georgia Cinerama Theater. I do not go into this traffic clogged area unless I have to and did not know that the Zestos was closed. It must have operated there for 50 to 60 years. The Sizzler Steakhouse mentioned by Will was a regular stop for me as a group of us would usually go there following the Monday morning managers meetings once Georgia Theater Company moved their offices from the Fox to Lenox Square. Last time I was in the area the old Shoney’s was still there in its derelict condition although someone has told me since that it has finally been torn down.

The only change I would make in any of these later comments is regarding the Great Southeast Music Hall. Actually, the theater was there first, opening in about 1969 with the addition of the Broadview 2 in 1972. When Weis sold out and #2 became George Lefont’s Screening Room, the old #1 became the music hall. It then moved in 1978 to the site of the old Cherokee Theater.

Lots of movie theater history at this intersection as well as many memories for those of us who grew up in this area. Now it is just a traffic nightmare occupied by big retail and office developments with nothing unique to distinguish them from countless other such developments around the city.

I do think the Zesto’s is still there, as of a few months ago… a couple of other fleeting memories are of a Victoria Station that was still standing at the corner of Lindberg and Piedmont, I never went there but I remember seeing it quite a few times.

a “Parking Palace” opened on Piedmont Road 6 miles out of Atlanta on September 29th, 1936. Is this the same drive-in? If so, then this was the 2nd drive-in in the area.

Is this the ad you are talking about? The Constitution newspaper has no such ad on September 3rd, 1939. 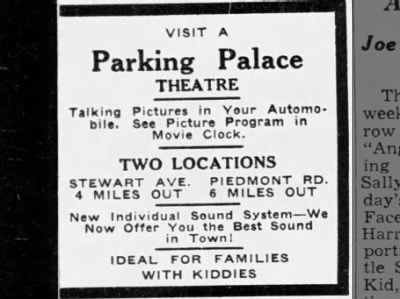 Both “Parking Palace” was closed in 1942 according to the article below.

Article about drive-in history in Atlanta It reopened (or new drive-in built on the site of the Parking Palace) on September 10th, 1947. Grand opening ad in the photo section.

The newspaper article zooms in when you click (or point) on it.

The “Parking Palace” from the late 30’s was actually located further up the road at the site where the Buckhead Crossing shopping mall is. Its in a 1938 aerial image and only had about 4 rows of ramps.