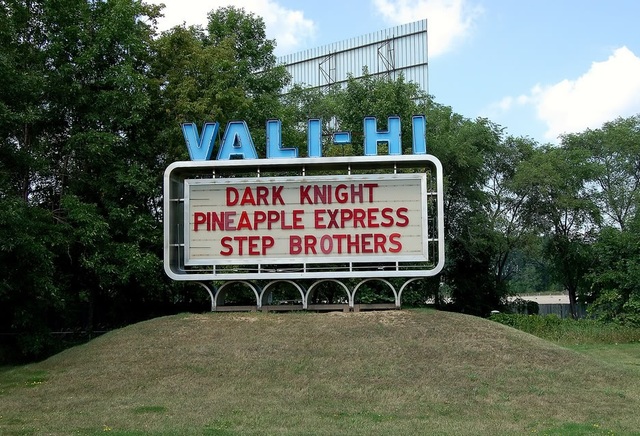 The Vali-Hi Drive-In was opened in 1966 and has a single screen with a capacity for approximately 800 cars.

If its a warm night, and you have a decent radio or stereo system, not a bad way to go. 7.75 buys access to all 3 movies in a night if you choose (although you can’t leave the property and come back). They tune the sounds via a dead FM frequency hence the need to use your car radio or some other radio. I wouldn’t make this place a habit because you have to get comfy, run up your battery, you miss details like what the text message the person in the movie got said because you are clear across the other end of the lot, but is cool to do once and say you did it.

I love going to this drive-in! We like to arrive early, grill hotdogs, hamburgers or whatever. We play misc. out-door games ie: toss a frisbee etc. and have some good-old-fashioned fun. It is nice take a break from modern technology ie: (cell phones etc.) and.enjoy spending time with friends and/or family! Without a doubt, I’d recommend to others who enjoy the outdoors on a warm summer night!!! :–)

I can’t find anything anywhere on the net that indicates when the Vali Hi opened. A 2013 article in the Star-Tribune said that (then-?) owner Bob O'Neill had operated the projector “(p)retty much every summer night since 1984”.

It’s not in the 1955-56 Theatre Catalog Minneapolis territory, which would have surely noticed it in its back yard.

In short, the Vali Hi probably opened in the mid-1960s.

The Vali-Hi Opened In 1966 According To Google.