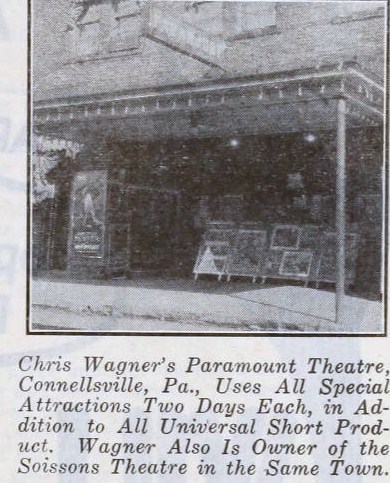 The Paramount Theatre was opened on July 18, 1916 with Billie Burke in “Gloria’s Romance” & Marie Doro in “The Heart of Nora Flynn”. It was taken over by the Soisson Theatre Co. on July 1, 1949, and was renamed Fayette Theatre. It had a grand re-opening on July 19, 1949. It was closed in 1952. It appears that the theatre was also used for live entertainment. On January 30, 1953 it reverted back to its Paramount Theatre name, but closed on August 16, 1954 with Philip Carey in “Massacre Canyon” & Marlon Brando in The Wild One". It was sold to a church in 1955.

Before the 1949 remodeling, the Fayette had been called the Paramount. The new owner, Edwin P. Brown, was also the operator of the Soisson Theatre. This information is from an item in the August 13, 1949, issue of Boxoffice Magazine.

I haven’t found the Paramount mentioned in any later issues of Boxoffice. A 1956 Boxoffice item said that the only theaters still operating in Connellsville were the Soisson and the Orpheum, so the 1954 closure of the Paramount had probably been permanent.

The Paramount Theatre launched in downtown Connellsville on July 18, 1916 with “Gloria’s Romance” and “The Heart of Nora Flynn.” R.L. Hannam was the architect. The theatre adjoined the Globe Theatre which had the Paramount film contract and ceased operations when the Paramount opened. The theatre switched to Vitaphone for talkies in 1929 which included a major interior overhaul.

On July 1, 1949, the Soisson Theatre Co. took on the Paramount and decided to change its name and held a re-naming contest. The winner was the Fayette Theatre upon relaunch on July 19, 1949 opening with “Song of Idaho” and “Highway 13.”. The theatre closed in 1952. It relaunched on January 30, 1953 as the Paramount with “My Outlaw Bride” and “It’s in the Bag.”

630 is well out of downtown. There are three blocks of houses before you get to the 600 block. I wonder if the address is correct.

If it did indeed adjoin the Globe, then the address was either 213-215 (which would have been new construction replacing a house), or 207, which would have been a conversion of a furniture store. 215 has been again replaced by an ugly little office building, while 207 still exists under a hideous slipcover.

Here is an item about the Paramount Theatre from the June 24, 1916 issue of The Moving Picture World:

“Connellsville, Pa.—The attractive new theaters of Messrs. Wagner and Wishart, at Connellsville, Pa., is receiving the finishing touches of decorators and furnishers and will be ready for opening about July 1. It will be called the Paramount, and promises to establish a place among the foremost theaters in Western Pennsylvania. The building itself is fireproof and thoroughly up-to-date in every way, having cost about $30,000 to erect. The seating capacity will be 1,000. Among other features of the house the projection booth is built of steel and is located on the outside of the theater. Two Simplex machines are being Installed. Wagner and Wishart have conducted the Globe theater in Connellsville for the past four years with much success, and they are embodying in the Paramount the results of their experience. When the new house is opened the Globe theater will be discontinued and the building it occupies converted into storerooms. C. A. Wagner, who has personally looked after the Globe, will continue in the active management of the new house. The large patronage which the Globe has enjoyed will assure the popularity of the Paramount among the moving picture goers of Connellsville and vicinity.”

The fact that the article says the building had cost $30,000 to erect suggests that it was not a remodeling of the furniture store at 207 Pittsburgh Street, but a replacement for the house at 215 Pittsburgh.

Seating capacity would really only have worked for a new building.