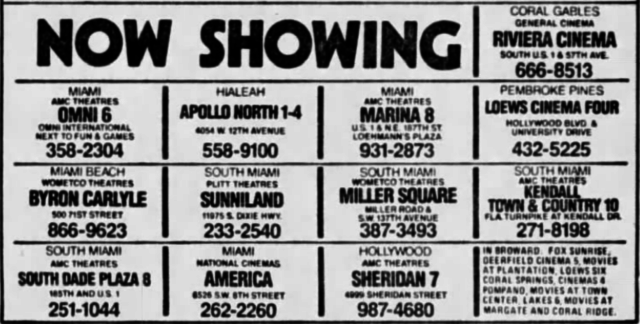 Opened as the Sheridan Seven on December 12, 1980. On November 13, 1992 it was expanded to 12 screens and operated by AMC Theatres. It closed in March 2008 and was immediately demolished.

Al, Was the Omni, short lived as it was, merely a four? Perhaps I have it confused with the Atlanta Omni, but I thought it was a six. You must have wirked with Dennis (Manager) and Timmy (Projectionist). Remember when Phil Singleton was hired on as assistant regional manager, out of St. Pete? I think Don White was the regional manager at the time…?

If memory serves, AMC Omni started out with six screens, four more added later. I was there only once, for a “Chariots of Fire” press preview — the auditorium was the standard 1970s AMC tube/shoebox design, with standard-issue red wall treatments, as with the Lakes 6 and Boca Mall 6 further north.

Sheridan 12 saw extensive use for preview screenings well into the 90s, usually in one of the larger auditoriums well-fitted for widescreen.

Wondered how much longer they would last given the proximity to the Oakwood 18.

Brice, I do remember Dennis and Tim. The Omni six and four were across from each other and had separate GM’S for a while. Phil Singleton; an ego looking for a man.

I am not sure I exactly where the Sheridan Plaza is/was but you guys sure threw me a blast from the past mentioning the Omni. That was one of my first “date theatres”. I remember the merry go round they used to have and the arcade area. Wow! Anyone have any pics to share?

Maria (grew up in Hialeah)

Al;
“Ego looking for a man” Ha ! Great description of Bush hog Singleton, (his nickname from the armed services).
Ron Eiben was the DM, a professional apple polisher. My understanding was that they made him the disrtict engineer eventually. After Stan died, the whole company went the way of most corporations: Reward incompetence with a promotion.
Bruce

I totally remember opening weekend at the Sheridan 7. It was December of 1980 and for the first week of operation, they ran 7 second-run films and charged 75 cents for all shows all times. The only three movies I remember from that week were “Being There” which my two friends and I went to go see, Close Encounters of the Third Kind: The Special Edition, which we snuck into about a half hour into Being There, because we were bored off our asses and All That Jazz, which my mom took me to see. A week later, they opened amid huge fanfare with a bunch of big Christmas films such as Popeye, Stir Crazy, Seems Like Old Times, The Formula, 9 to 5 and First Family.

Saw soooo many films here. Besides the above-mentioned ones; The Four Seasons, Breaker Morant, Under The Rainbow (where someone stepped on my toe while I was wearing flip flops and broke it), King of the Mountain, The Night the Lights Went Out in Georgia, Ghost Story, Ragtime, Victor Victoria, Blade Runner, The Thing, Shoot the Moon, The Sender, Tootsie, Terms of Endearment, The Keep, Yor, Eddie & the Cruisers, WarGames, Hard to Hold, Streets of Fire, St. Elmo’s Fire, Pee Wee’s Big Adventure, Real Genius, The Emerald Forest, Peggy Sue Got Married, 9 ½ Weeks…

You always wanted the film you were seeing to be in Theater #7, as that was the biggest auditorium. And you never wanted to be stuck in #4 or #5- they were the smallest and usually where the older movies went after they’d been playing for a while. I remember seeing 9 to 5 for the third time in April of ‘81 in the #5 and Tootsie for the 2nd time in April of '83 in #4. Theaters #1-3 and #6 were all relatively the same size as #4 and #5 in width, but much deeper.

This theatre usually played the same films that were booked into the Cinema 4 in the University Plaza in Pembroke Pines. We used to schlep up there a lot until The Sheridan 7 opened.

You can the see the Grand opening ad at View link Looks like they interlocked one of the movies since there are only six sets of showtimes on that ad.

The December 12th, 1980 grand opening ad has been posted in the photo section of this theatre.

The AMC Sheridan 7 opened with 2,000 seats on December 12, 1980. Architectural sketches were by The Architectural Group (or TAG) in Mobile, Alabama. The theatre was re-imagined as the AMC Sheridan Plaza 12 with a soft launch reopening on November 10, 1992. The theatre closed 15 years later at the exit point of a leasing agreement on October 25, 2007 with one of the last films screened as “Gone, Baby, Gone.” The theater was demolished in favor of a Kohl’s retail store.