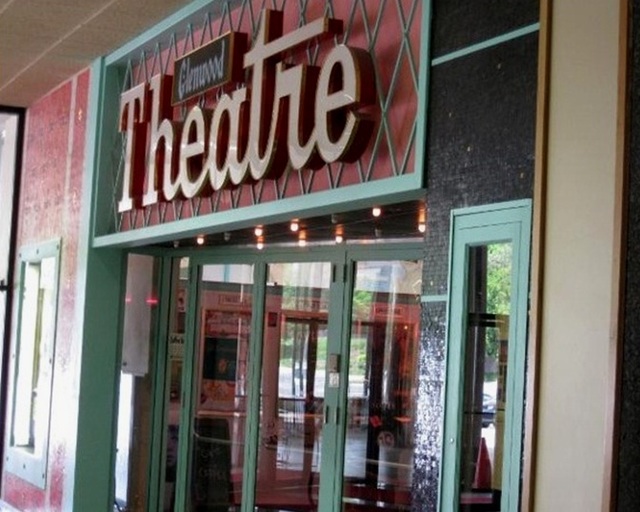 This theatre built on the lower level of the Ranch Mart Shopping Center in Overland, Park, Kansas opened as a twin theatre in 1967. The complex had 70mm capabilities and was operated by Commonwealth Theatres under the direction of Richard O'Rear.

In 1972 two additional screens were added and the theatre operated to capacity business as a first run complex.

Commonweath Theatres sold the company and it was absorbed and the lease on the Ranch Mart was vacated. It was operated as a discount house for several years until the mid 1990s by an independent operator.

The theatre was stripped of its seats, projection equipment, drapes, concession stands, poster cases and outside marquee and became a storage facility for the center for a number of years.

A name change to the Leawood Theatre, a street marquee, state-of-the art projection and sound, plus a retro decor have brought this aging 40 year old theatre complex out of the shadows to become a viable and profitable operation.

It was renamed Glenwood Arts Theatre in January 2015.

The Ranchmart was the flag ship of the Commonweatlh Circuit. I was always wondering what actualy happened to it after the Canon Group took it over from Commonwealth. This theatre and the Glenwood were located in a very affluent end of Kansas City, and were extremely good grossing theatres. The banner on top lists it as having 5 screens, was one added I was under the impression it only had 4, plus what were and are now the seating numbers for each auditoriam. Could you also expand on if the new theatre has more than 35mm capability and sound. I and glad to see it open again and I wish you much success in your venture.

Visted this theatre on Sunday, June 10th. What a treat! It’s like stepping back in time to 1970. I can’t remember the last time I saw a movie in a theatre with operating curtains (side to side on a mildly curved screen) and no preshow advertising. I saw Oceans 13 in the biggest house (#1, which currently seats just over 500). Print and presentation were perfect, except for a glitch upon start up. Booth appears to be set up for changeover AND platter operation. Something burned up on the first projector and it took them about 10 minutes to lace up the other unit and start the show. So, we know both of them are in usable.

As was common in my youth, the auditoriums are very long, much longer than they are wide, and while the screen was plenty big it was by no means overpowering (a sin committed but most modern stadium seating shoeboxes). There was a considerable slope in the floor from the back to about 2/3s of the way to the screen, then a gentle rise up to a small stage and the screen itself. The floor was concrete with Commonwealth design carpet on the aisles. As to the carpet itself, it’s beautiful and in excellent condition; a deep bluish-purple with a diamond and Oscar statue design.

I had the privledge of speaking briefly with the owner and was able to ask some questions. The carpet which I found so nice dates to 1984! which was the last time Commonwealth rennovated the theatre under their ownership, which makes it 23 years old. The theatre is currently a 4 plex operating as a 3 plex. The unused auditorium (#2) is just to the right of the concession stand and is reached by 3 stairs or a snaked wheelchair ramp that is accessed at the entrance to auditorium #3 (which is in use). I asked the owner about this and he said that the house is just as long as the other auditoriums but very, very narrow and right now they’re in the process of dividing it in half to make 2 front-to-back houses accessed via a common door. So, it will be a 5-plex soon enough.

The lobby decor was obviously set up by a fan of cinema…classic movie posters and paintings of movie stars are very nicely displayed on walls of white-painted brick, and there are several benches for patrons to relax on while waiting for their shows. This theatre is in an older but well kept neighborhood, and the clientel is decidedly older. At 31 I was one of the youngest persons present out of about 100 seeing the 1:30 matinee. Handful of kids were present but were far better behaved than most I’ve run into at the theatre lately.

With it’s classic design, it’s decidely adult clientel and a variety of programming (blockbusters and art house fare) this is a great place to see a movie, and I highly recommend catching a show here if you’re in the Kansas City area.

The achievements of the Fine Arts Group in Overland Park cannot be overstated. They’ve made going concerns of 3 locations that were shuttered and had been given up on by all the KC chains. This theatre (Leawood), the Glenwood Arts triplex in the Metcalf South Shopping center, and the Rio in old downtown Overland Park. I will soon be vacationing in KC and intend to see films at all three locations.

This theater purloined it’s name from the old Leawood Drive-In which used to be located at 120th and State Line Road.

I recently saw True Grit at this location. I was pleasantly surprised at how nice the interior of the theater was (most northerly theater). As another poster said, the crowd was fairly old, but I am no spring chicken myself. The only other movies I can remember seeing at the Ranchmart are Romeo and Juliet and Catch-22.

The theatre was run by a company called First International, co-owned by Morgan Creek Productions (the film company) in the 1990’s. Before then, United Artists owned the theatre (after Commonwealth was sold).

This theater has now changed its name to the Glenwood Arts.

The original Glenwood Arts has closed down its tri-plex at the Metcalf South Mall in Overland Park, as the mall is set for demolition. The Fine Arts Group, which had been operating this theater as the Leawood, has changed the name to Glenwood Arts to reflect the move. Now with five screens, the ‘new’ Glenwood Arts will play a mix of first-run and arthouse films.

The Glenwood sign, which was salvaged from the original Glenwood Theater operated by Dickinson, has been moved from the mall to this new location.

Brothers Brian Mossman and Ben Mossman continue to own the theater, along with the Rio in Overland Park. Additional information can be found at the offical website www.fineartsgroup.com.

This opened on May 22nd, 1968. Grand opening ad in photo section

Outclassed Ranch Mart turns off the lights for the last time Former trendy theater at 95th and Mission will close Sunday. The Ranch Mart Cinema at 95th Street and Mission Road will close after the last show Sunday night, ending nearly 30 years of operation.“The lease is expiring, and we just feel that the demand for discount pictures is waning,” said Ron Leslie, operator of the four-screen “dollar” house. Leslie, a former AMC Entertainment president, said his Resort Theaters of America will continue to operate the two-screen Metcalf Theatre, which also offers second-run films at a reduced ticket…