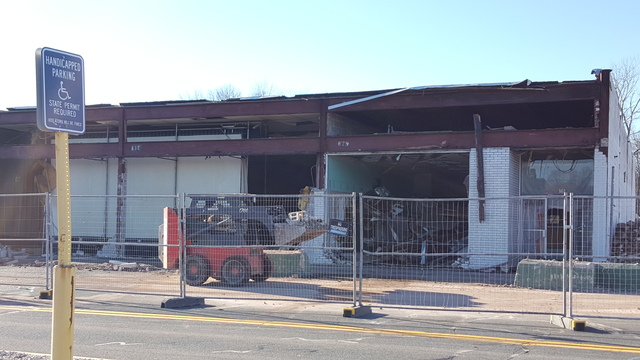 Okay, people, here is the REAL scoop! The fire that destroyed Woolworths next door DID NOT damage the theater! How do I know? I attempted to re-open it in the early 2000s and was shown the interior by the realtor. THERE WAS NO VISIBLE SMOKE OR FIRE DAMAGE ANYWHERE!! Why did I not go forward? The cinema owner stripped the interior of anything and everything of any value. The screens were damaged, the seats were shot (actually, they were spent while it was being bled … I mean operated). The A/C had died while the joint was still in operation so the owner cleverly installed ceiling fans (worked great with 300+ people in dead summer!). While shuttered, scavengers stripped the copper from the heat unit. I assumed since I was just planning to lease the unit, the heat and air would be repaired / replaced! I was told that I had to replace them, AND have the roof over the place repaired at MY expense as well (the roof leaked when the moviehouse was open — anyone remember the commercial garbage pails taking up seats in Cine 2??)! And, best of all, the owners wanted $10,000.00 per month!!! When asked what I would receive for my rent money, I was told “the keys.” I ended up leasing an 8-plex for $2,000 less! When attempting to first re-open the Kensington Cinema (I got a variance for a marquee, but not for parking … politically-fueled, but that’s another story) I spoke to several theater equipment dealers and found out that the Berlin owner had contacted them to determine current replacement values for his equipment, and then never got back to them (i.e. He wanted full replacement cost from his insurance carrier to assist with his retirement). NOTE: The owner and his late brother (they comprised the Outdoor Theatre Corp. —– owned Manchester & Pike Drive-In as well, hence the name) also operated the Vernon Twin, which just happened to close at the very same time … hint, hint!! Berlin Cine offered dirty carpeting (for way too long); uncomfortable as hell seats which had seen their day long ago — the maintenance guy just kept stuffing the seats with foam, hence the bulky look, and the cushions falling off on occasion; dirty screens; sticky floors; broken-down projectors; the list goes on … I could tell you stories that you wouldn’t believe, but I’d rather not get sued! Who said mice? Hell, the Elm was infested with roaches, but I digress … okay to sum up — Berlin Cine was abandoned after being stripped. The space remains but there were tickets strewn everywhere and popcorn oil had been poured on the carpeting (I saw this while touring the site). The chance of this theater ever re-opening is a fantasy, unless someone strikes it big and doesn’t mind operating a business that is no longer viable. I know it’s not, as I attempted to capture the early 80s magic from Kensington Cinema, not once, but twice …. the customers never materialized … I believe that any theater will less than maybe 12 screens AND stepped or stadium seating is doomed before it opens!!!

Drive in Dave – I would argue that their were improvements made to the cinema in the late 90s and while it was not in the best condition at it became much cleaner and better managed. So, What cinema or drive in do you think was operated efficiently then?

Ok Drive in Dave, I saw Plainville Drive in on your like list ….. It was THE BEST in every possible way.

@Shine09 – I think my indoors and Drive-In were ultra-efficient. Re. Berlin Cinema — new carpeting does not a better-run theater make. The former Plainville Drive-In manager who operated Berlin before its demise was too tight-fisted for me. I am still shocked that the projectionists were forced to play “Exciter Lamp Shuffle” just to save the cost of a bulb replacement! Worse yet is an owner I worked with who would jump-start one of the candy case lights to save the cost of a fuse!! Dave Lounder (TheDriveInGuys.com)

Sad but true the cinema is being torn down. The inside was damaged by the fire from Woolworths but mostly by vandalism I wished the town of Berlin would have archived it in pictures etc because the theater meant so much to so many over the years I’ve taken some pictures I just need to figure out how to get them on here. A sad day for those that grew up attending the $0.99 theater

@annie11 .. Berlin Cinema was not damaged by the Woolworth fire. Complete backstory several comments above. I’ve acquired several BC 1 & 2 items over the years and plan to sell them via ebay over the coming months. I also have video of the interior which I plan to upload to one of my websites soon. Best, Dave

I rest my case.