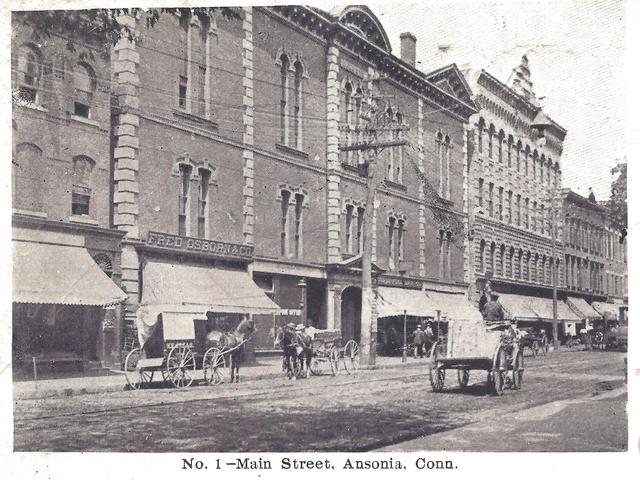 Built in 1870, the Ansonia Opera House had live shows and later screened movies, it was independently operated. When this ceased, it was used for recreational activities.

The building is now mainly used for storage.

The front doors of the former Opera House are closed, but if you look up the stairs, you will see Drum Studio sign. There are two stores on either side on street level. Around back, parallel to the railroad tracks is a small road that ends at a fence and becomes Farrel’s Manufacturing’s right-of-way.

I saw 2 workers doing roofing work on a lower portion of the roof – one floor on ground level about 500 sq. feet. The workers told me it was to become a restaurant that planned to open around April 1, but they said May 1 was more realistic. It had its own stairwell in back. I asked them if the landlord was paying them and they said yes and they said yes and he had just had them refinish the entire roof structure. I noticed the 2nd and 3rd floor windows had wood in them and i asked if he had planned to renovate the entire structure. They said eventually, but it would cost a lot of money and the landlord was into that.

The Ansonia Opera House is listed in the 1897-98 edition of the Julius Cahn Official Theatrical Guide. The seating capacity was given as 900; ticket prices were 25 cents to 75 cents. Illumination was by gas; the proscenium opening was 30 feet wide X 14 feet high, and the stage was 30 feet deep. The Guide says that the auditorium was on the 3rd floor. Dana Bartholomew was the Mgr. Nearby hotels were the Dayton House and the Arlington; newspaper was the Ansonia Sentinel.