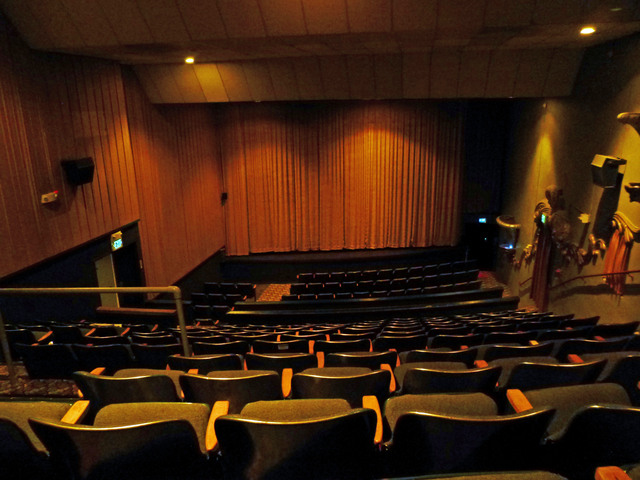 The T & D Theatre was built for live theatre and movies. Designed in a Greek Revival style by architect Albert W. Cornelius, it opened December 9, 1914 with the Italian movie “Cabiria”. It had an orchestra and was equipped with a Wurlitzer 2 manual, 7 ranks organ which had been transferred from the Embassy Theatre, San Francisco. Two more ranks were added to the instrument.

Known as ‘The Cal’ to locals, the theatre closed in 2001 and was reopened by Landmark on June 28, 2002. It was closed on March 16, 2020 due to the Covid-19 pandemic. Landmark Theatres announced in October 2021 that closure would be permanent. Plans have been put forward to demolish all but the façade and build a 15 story block of apartments on the site.

Great history! Does anyone know when the marquee was made? It looks like it is not from the 20’s or 30’s. It looks newer. Just my guess.

gabrielbarr: An earlier comment by long-time Cinema Treasure member William says that the California theater got a Skouras-style remodeling in 1952. That was probably when the current marquee was installed.

There might have been an earlier remodeling under the Skouras regime (major theaters in the chain would get an updating every few years, and the California would have been due for one in the late 1930s or early 1940s) but the pre-war marquees tended to be more elaborate than the one on the California, so it is most likely a post-war creation, and thus most likely installed as part of the 1952 project.

This was the third Berkeley theatre built by Messrs. James Turner and Fred Dahnkan, the previous being the Berkeley Theatre (1911) and the Varsity Theatre (1912). They divested of both these venues before opening the T&D.

The last show under its original name took place September 16, 1923, a double bill featuring “White Shoulders” with Katherine MacDonald, and “A Noise in Newboro” featuring Viola Dana. An ad in the previous day’s Berkeley Gazette announced that afterwards the house would be closed for “extensive alterations”, reopening the following Saturday, September 22, and that its name thereafter would be the California.

The following Friday an announcement ran in the Gazette that the opening was to be delayed until the following Wednesday, September 26. The opening night’s feature was “Within The Law”, starring Norma Talmadge.

Ads for the final show, subsequent delay, and re-opening night now in the photo section, along with two ads announcing the 1914 opening.

This reopened as the California Cinema Center on April 9th, 1976. Ad in photo section.

The California was one of three Berkeley theatres acquired by Fox when it took over West Coast Theatres Inc. in early 1928, the other two being the UC Theatre and the Campus Theatre.

The Berkeley Gazette featured an 8-page section in its October 9 issue with numerous items written by the Fox publicity department. According to one of these, the original California was “torn down, a sacrifice to progress”, which was not the case, it was seriously gutted and reworked, which included a new facade. The remodel took 8 months and was said to cost $250,000. The original Greek Revival style of the auditorium was replaced with a design theme billed as “A Symphony in Modernism”. It was designed by the Los Angeles firm of (Clifford) Blach and (Floyd) Sanbery, Architects and Engineers.

The auditorium was described as “Neutral walls flowing into a proscenium arch distinguished for its block motif presented in shades of buff and desert sand. Organ Grills of pale gold stand out in silhouette against a background wherein pastel greens rose and browns blend in conventional pattern. Auditorium ceilings repeat the design and the rose note is accented again in richly upholstered seats of plush and leather”. The stage curtain was described as “shimmering orange velvet with its border and floral pattern of royal blue. Silver sequins and multi-colored jewels lend added brilliance”.

A two-sentence item mentioned that the California had a “new and magnificent $25,000 Wurlitzer pipe organ”, the console of which was “finished in Roman gold” with “raised fleur-de-lis designs on either side that contribute further to its modernistic and individual appearance.”

I checked the Wurlitzer opus list to get details, there is no record of a new organ being installed at the California in 1930, and all instruments installed that year are accounted for.

The venue was however home to a Wurlitzer, opus 85. Moved there in the spring of 1917, Opus 85 had originally been installed the previous year in this theatre in San Francisco. It was a style 3 Sp with a two manual console and 7 ranks. Two additional ranks were added when it moved to Berkeley. Opus 85 wound up going to the nearby town of Vallejo in 1954, where parts were used in restoring opus 1833.

The feature opening night was the Paramount romance comedy “Follow Thru”. Also on the bill were a Mickey Mouse cartoon, a talking dog comedy, newsreel, travelogue and an organ concert by Floyd Wright.

Added to the photo page are a 1914 architect’s drawing of the original T & D Theatre, a photo taken during the 1930 renovation, a circa 1932 photo of the recently remodeled Fox California, and two of the 1930 opening night ads. My thanks to the Berkeley Historical Society for the scans of the photos, also for aiding me in obtaining the scan of the architect’s drawing.

The California Theatre closed March 16, 2020 due to the COVID-19 pandemic. On October 21, 2021, Landmark Theatre Circuit announced the closure would be permanent making the March 16, 2020 date as its final date of operation by the circuit.

Here is a link to an SFGate story about the closing of the California:

According to Mick laSalle film critic for SFChronicle, there may be smore lives in this Cat!

There talk around the bay and Berkeley of several options: UC(live venue), Esquire(repurposed IMAX), Mission(revamp via Alamo) or indepepent (think Santa Cruz 9 or Campbell Pruneyard 7). Whatever option they need at least 1 elevator! That balcony is extemely steep! Yikes! 😘😘

The California Theatre, a valuable community resource for film and the arts, closed in October 2021, but we’re working to see that it doesn’t have to stay that way.

I managed The Cal for 18 years, and have joined an effort by the Art Deco Society of California and community supporters to preserve the building. A hearing for awarding it landmark status is scheduled with the Berkeley Landmarks Preservation Commission for April 7.

In addition, a Friends of The Cal group has begun to organize a campaign to encourage Berkeley’s City Council members to take an active role, with the community, to find a way to bring this important cultural destination back to life.

Please send letters of support to the Landmarks Preservation Commission and the City Council to help our effort.

Find details and links making it easy to take part at: https://www.friendsofthecal.com/write-a-letter

A proposal to build “approximately 15 stories” of new housing behind the theater’s facade cleared an early hurdle this month.

An article in Berkeleyside Here