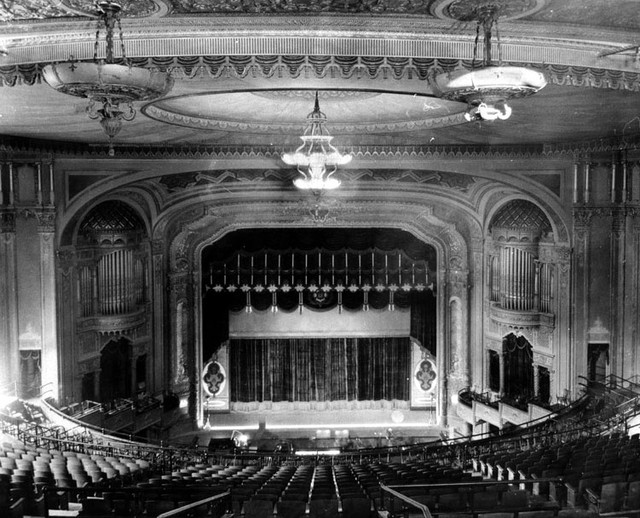 The RKO Hillstreet Theatre was the sister theatre of San Francisco’s Golden Gate Theatre. The Hillstreet Theatre was opened in March 20, 1922 with Elaine Hammerstein in the movie “Why Announce Your Marriage” on the screen, and a programme of vaudeville on the stage. It was designed in a Gothic Revival style by architect G. Albert Lansburgh. In 1947, the foyer and entrance was remodeled into a ‘Moderne’ style, to the plans of the Heinsbergen Decorating Company.

The theatre closed in April 1963, and was demolished in 1965. Today what once was the site of the RKO Hillstreet Theatre sits a bank branch and a parking lot.

Aiming right at the competition, a circa 1931 ad for the RKO Hillstreet can be seen on Hollywood Boulevard. The photo is from the USC archive.
http://tinyurl.com/4xpm8a

Here is a September 1938 ad from the LA Times:
http://tinyurl.com/6rdkwl

The April 26, 1947, issue of Boxoffice Magazine ran an article about the recent remodeling of the Hillstreet Theatre, with several photographs. The remodeling was designed by the A.B. Heinsbergen Company.

Here is a late 1930s view from the USC archive:
http://tinyurl.com/cm6klq

It looks like they are turning the old bank building on the theater space into a nightclub. Here is a 1940 ad from the LA Times:
http://tinyurl.com/lon8j6

The largest theater in downtown Los Angeles closed two weeks ago-at least temporarily-with no more fanfare than was accorded its opening 41 years ago. The Hillstreet, at 8th and Hill, opened Monday afternoon March 20, 1922, with a vaudeville program and the film â€œWhy Announce Your Marriage?â€ with Elaine Hammerstein. The theater closed Sunday evening April 14, 1963 with Vincent Price in â€œDiary of a Madmanâ€.

Although â€œshortage of productâ€ was the reason given for the theaterâ€™s closing, it is reliably estimated that at each of the last three evening performances the 2,752 seats were occupied by a tiny fraction of its capacity. Metropolitan Theater Corp., which leased the Hillstreet from the Radio-Keith-Orpheum Corp. in 1959, said it hopes to resume regular programming when summer vacation begins for the cityâ€™s schoolchildren.

Designed by G. Albert Lansburgh, the most prolific theater architect in western United States, now living in retirement in San Mateo, the Hillstreet has an almost identical â€œsisterâ€ theater, the Golden Gate, in San Francisco. Though somewhat smaller than the San Francisco house, the Hillstreet has the same faintly ecclesiastical Spanish Renaissance styling. The fan-vaulted ceiling in the foyer of the Hillstreet was covered up when the entrances to both theaters were modernized on their 25th anniversaries.

Clearer copy of the 1953 photo added. 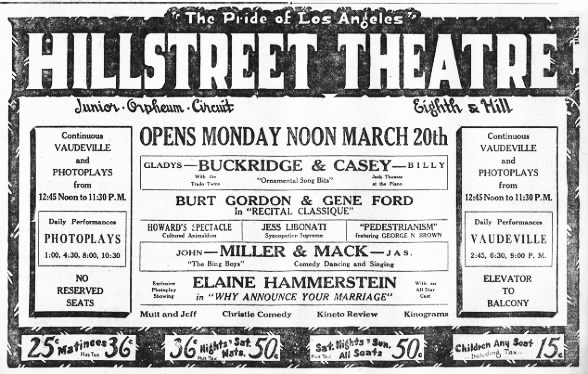