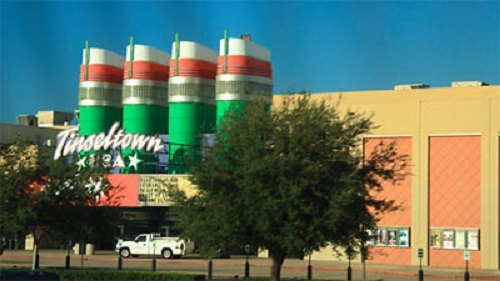 Operated by Cinemark, the Tinsletown USA Westchase was demolished in 2008.

This multiplex opened in December, 1995, and will close before the end of 2007 and be demolished to make way for an office complex. From debut to doom in a dozen years. I wonder if that’s a record?

A demolition permit for the Tinseltown Westchase 25 was issued by the City of Houston in January of 2008. The theatre has now been demolished.

This is probably the record for the largest closed multiplex, I’ve heard of the Regal Hollywood 20 in Lutz, FL and another megaplex Loews had in North Versailles, PA. But those only lasted a few years, at least this made it 12. Still its a short life span and they had all the modern amenities including an expanded concession menu from what the images at Cinema Tour suggest.

“This is probably the record for the largest closed multiplex,”

It was a record… The riff raff started coming to this theatre, trashed it and the regular patrons were scared off. Can’t have anything nice.

I uploaded its aerial and an aerial of its demolition.

I remember watching 101 Dalmations for their grand opening in 96 – Selena 97, Big Mommas House 2, Silent Hill, and last pictures was Munich

I saw the special edition of Return of the Jedi as my first film at this theater. It’s also where I saw the first Shrek, and a film called Radio with Ed Harris.

Was a nice place. Great for the schools nearby.