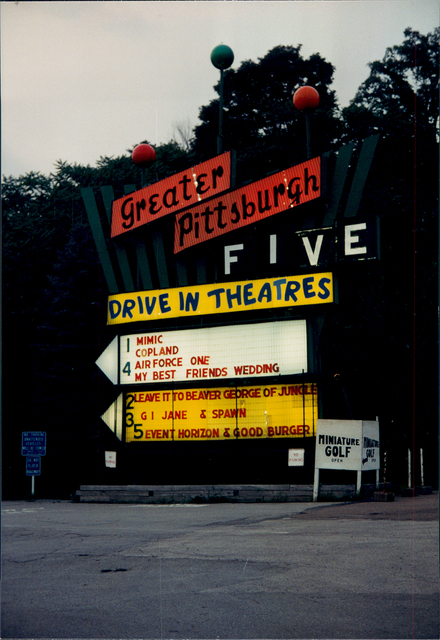 Located on Route 30 in the Turtle Creek district. Opened May 28, 1954 with a single curved 100ft x 75ft CinemaScope screen upon which was screened Richard Burton in “The Robe” It had a capacity for 1,000 cars. One of several Pittsburgh area drive-ins owned by Marty Warren and family. Originally had a children’s playground. In later years, a miniature golf course was added on the hillside before the box office. Extra screens were added on June 16, 1956, April 3, 1981, May 25, 1984 and June 20, 1986 giving a total of five screens.

Closed at the end of the 1997 season. A Wal-Mart now occupies the site where the Greater Pittsburg Drive-In stood.

This was a great place to see a movie. The main screen was slightly curved for Cinemascope features. I remember being able to see this drive-in from a distance as I climbed the big hill on the Thunderbolt at Kennywood. You could see the back of screen one (the curved one) and the front of screen 2 from the top of the Thunderbolt. In later years, they had five screens. We went there the last summer they were opened (1997) to see “Air Force One”. It is sorely missed.

Added grand opening ad and 1959 and 1969 aerials. It looks they reconfigured the screens and parking.

Your comment from a few years ago about the Greater Pittsburgh Drive-In occupying some of the land that the old Loews 20 sits on makes sense.

I used Yahoo Maps instead and I could see tht what you said is true. Just one thing though—use zipcode 15137 for both addresses.

I loved the Greater Pittsburgh Drive in, went to it in the early 1960,s with my parents, usually to see a war movie or cowboy movie my old man would want to see, lol. I went to it almost every weekend in my late teens in the late 60,s and 70,s with dates, usually to make out but to see the movies too, lol. In the 80,s when I was married, we would take the kids one night to see kiddie movies and one night for me and my wife to see a movie. I always liked the first screen because of the big grassy play area. Would play football or baseball with the kids. I hated it when they sold the property to wal mart, I wouldn,t go to wal mart the first 5 years it was open. Joe Warren, the son of Marty Warren took the money he got and bought an existing drive out in Scottdale. It’s called the Evergreen Drive In and now has 3 screens. I still go out there, but not like I did to the Greater Pittsburgh. Sad that drive in,s are almost all gone, but Joe is still trying to keep his going. Still miss the Greater Pittsburgh, was my favorite of all the drive in,s.