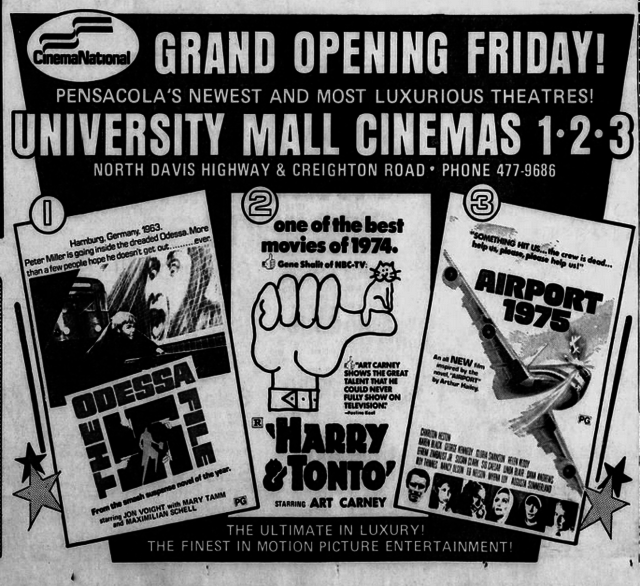 Opened October 18, 1974 as the University Mall Cinemas 1-2-3 with “The Odessa File”, “Harry & Tonto” and “Airport 1975”. It was later expanded to eight screens. Teicher Theaters operated 43 screens in ten theatres in four states. Offering drastically reduced ticket prices. This one closed in 2008

I believe the mall tore it down to build a strip plaza with a Target or other big box store.. I know Teicher did not have an option to renew the lease.

The original Cinema National University Mall Cinema 1-2-3 opened October 18, 1974. In 1976, United Artists took on the location. In February of 1979 UA doubled the screen count to the unwieldy UA University Mall 1, 2, 3 & 4, 5 6. In 1982, a two-screen theatre called the Cinema Tavern opened adjacent to the University Mall with two screens.

UA would expand again with an 8-screen theatre called University North and the older theatre called University South. The Silver Screen, a four-screen discount house behind the mall opened possibly in the Cinema Tavern spot – but perhaps not. The UA would close the older theatre which became a live venue for a brief period while the larger theatre would become the University Mall Dollar Movies 8 under Teicher and closing in 2008. It became a house of worship before being demolished.