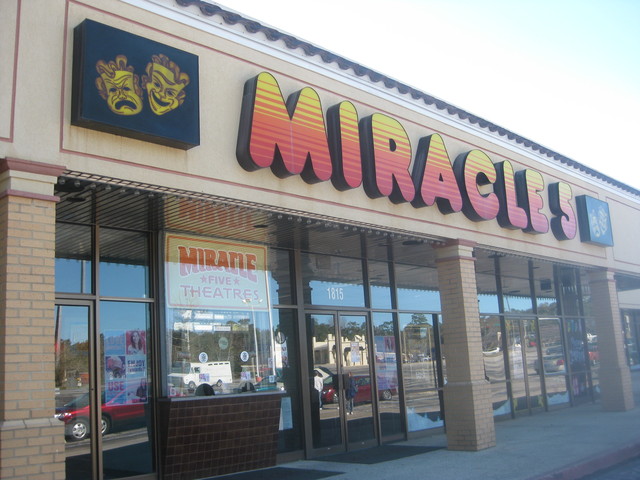 The Miracle Theatre was opened December 25, 1968 with Julie Andrews in “Thoroughly Modern Millie” playing in its 1,000-seat single screen. It was operated by Eastern Federal Corporation. On June 2, 1972 a second 500-seat screen was opened which was built on an adjacent vacant lot. In the late-1970’s the original screen was twinned into two 450-seat screens. In the early-1980’s two more screens were built adjacent to the building, each seating 300. Last operated by the Regal Cinemas chain as an art house theatre. The Miracle 5 Theatre was closed on August 14, 2011.

I spent many hours at the Miracle as a moonlighting projectionist. Good times. I got plenty of exercise walking between the two booths and keeping five schedules going. I hate to see her fade away.

Chuck 1231 If you got the infomation from my movie-theatre.org website It means about 1975, about 1980 and about 1985. Trying to find more accurate dates. It looks like it opened as a single cinema in the late 1960’s.

Eastern Federal Corporation (Formerly Known as H.B. Meiselman Theatres) built the Miracle as a Single Screen 1,000+ seat theatre in a Shopping Plaza they owned in the late 1960’s. In the mid 1970’s, they added a separate 500 seat theatre on an adjacent vacant lot, connecting the lobbies to make it a two screen theatre. In the late 1970’s EFC twinned the original 1,000 seat theatre, making it into two 450 seat theatres, and a three screen theatre complex. This is the picture of the Theatre as a 3 Screen Theatre taken in 1979. In the early 1980’s EFC used more of the adjacent vacant lot, and added 2 more 300 seat auditoriums connecting the Theatre to the existing strip shopping center, making the complex a 5 Screen Theatre. I had the pleasure of managing this theatre for a short time from the end of 1978 through the spring of 1979, when I was transferred to their operation in Gainesville, FL (The Royal Park Cinema 4). I returned to Tallahassee as their City Manager working out of the Varsity 3 in the Spring of 1980.