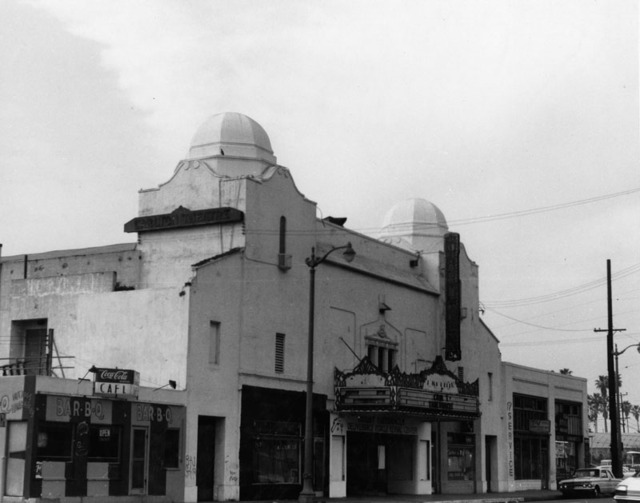 The film “Ed Wood” depicts the premiere of “Plan Nine From Outer Space” (1959) as taking place at the Pantages Theatre in Hollywood. The premiere was actually held at the Carlton Theatre in Los Angeles.

Here is a picture, courtesy of the LA Library:

The LA Times reported on 7/15/24 that Harry Arthur, Jr, general manager of West Coast theaters, was starting a matinee program for children. The Tuesday show at the Carlton in July 1924 featured the film “Scaramouche”, a musical performance by Floryane Thompson, who sang the Marsellaise, a Felix the Cat cartoon and Pathe news.

The Carlton was being used as a church in 1958. There’s no report of its demoltition some time later.

The Carlton would have been just below the intersection on the left. I don’t recall offhand what’s there now:
http://tinyurl.com/235ony

I drove by the intersection today. The theater was on the southwest corner of 54th and Western. There’s a paved lot now, but it looks like there was something in that space after the theater. Perhaps a gas station.

Aerial views in 1972 show the theater as already gone. That narrows down the time frame for the demolition a bit.

I went by the site of the Carlton in the early 1990s. There was a McDonald’s Restaurant on that site. I have a photo if anyone is interested in seeing it posted. Looking at that address today via Google maps shows what appears to be a fenced in construction yard.