Opening as Criterion on September 26th, 1923 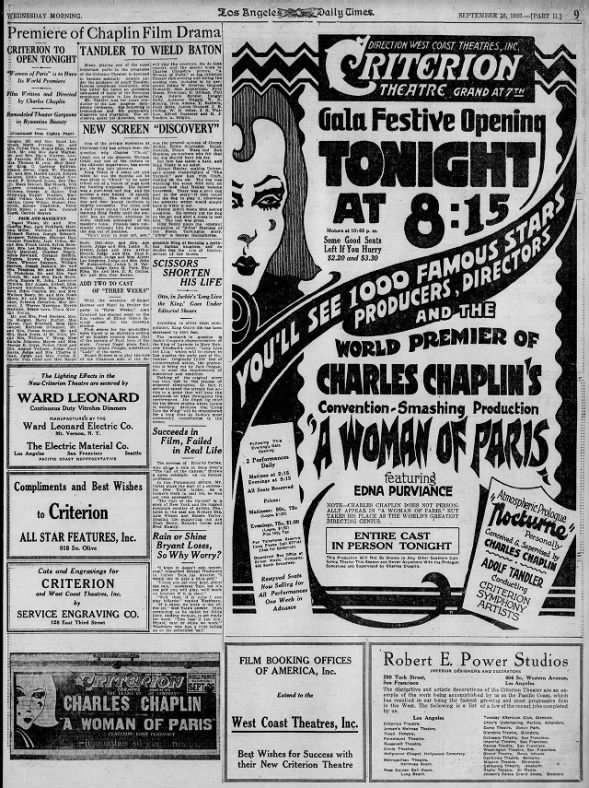 At Google Books there is a November 15, 1919, issue of The Moving Picture World with a reference to Tally’s Kinema in Los Angeles, so Thomas Tally was definitely the operator of the house at that time.

A reissue of D.W. Griffith’s classic “The Birth of a Nation” (1915) played at the Criterion about 1926, as evidenced by a Los Angeles Times ad (see link below). Unfortunately, I do not have the exact date of the ad, but I am guessing 1926 since the ad says that Rudolph Valentino in “The Son of the Sheik” (1926) is ending. And yes, that is a picture of a Klansman in the ad for “The Birth of a Nation”. That film was based on a novel called “The Clansman: An Historical Romance of the Ku Klux Klan”. Hmmm … I am so glad times have changed.

Here is the link to the LA Times Ad for “The Birth of a Nation” at the Criterion, probably 1926:

Thomas Tally’s off-and-on relationship with the Kinema/Criterion must have had a long run. I find numerous references in the California Index to a situation in 1935 in which it appears that Tally lost control of the theatre then regained it. However, in 1929 the house was clearly under Fox management, as on February 7 of that year The Times reported that its name would be changed to Fox Criterion (this was the period when William Fox put together the chain he would control for only a few years.) If Tally had hold of the place in 1919, then he must have lost it at least twice, altogether.

Indeed, he announced his acquisition on Sep 24 1919 (after which it is noted that he and his son Seymour locked their desks and went on a hunting trip to the mountains). On his way out he stated that the policy of the theater is to be materially advanced in every respect, with several changes to the stage and interior, as well as the front of the house, already being contemplated.

Thanks! Yep, I meant Tally’s New (ie first) Broadway as the candidate for first movie theatre on Broadway.

I’m now finding LA Times references to ‘Tally’s Kinema’ in late 1919… (Viz, Dec 5: ‘During his weekly executive session with the staffs of his two theaters, the Broadway and the Kinemaâ€¦’)

Could this have been the ‘handsome and comfortable picture house’ he was dreaming about to the Times a year before (see my quote under Tally’s Broadway. But the quote makes it sound like he was intending to build a theatre, not take one over. And then – could he have retired in the ‘20s, and then resumed control of the Kinema? 'Tis most byzantineâ€¦

Here is the LA theater lineup in 1908. It wasn’t until a few years later that they started differentiating between live theaters and movie theaters:
http://tinyurl.com/2bnoph

There were movie theatres on Broadway before Thomas Tally opened Tally’s Broadway Theatre at 833 S. Broadway in December, 1909. In fact, his own Tally’s New Broadway had already been operating at 554 S. Broadway for several years (the confusing name “New Broadway” might have been chosen to differentiate the house from earlier Tally theatres on other streets; I can’t find any evidence that Tally had had any earlier theatre on Broadway.)

The L.A. public library claims that this photo, depicts the interior Tally’s at 833 S. Broadway. That room looks too small to contain the nearly 900 seats the theatre was supposed to have had, though. I think it might be a picture of the narrower 554 S. Broadway Tally’s (the library’s photo database contains numerous errors, unfortunately.) In any case, most of the interior shots I’ve seen of L.A. theatres from that period look much the same as this photo, showing coffered ceilings and a bit of restrained classical detailing, so even if this photo isn’t of the second Broadway, that theatre probably did look a lot like it, or like the Hyman, or Woodley’s Optic.

The later Broadway’s facade was also rather plain in comparison to that of the Kinema (I’ve been unable to find an interior shot of the Kinema, but according to the contemporary descriptions the inside had the same French Renaissance style as the outside.) Also, even at 1700 seats, the Kinema would have had nearly twice the capacity of Tally’s Broadway.

The one other theatre I know of that might lay claim to the title of first purpose-built movie palace in Los Angeles is Quinn’s Supurba, the ca.1914 theatre on Broadway (the building was eventually demolished to make way for the Roxie). I’ve been unable to find out much about the Supurba, but the photos of it show an ornate facade, and the Roxie, on the same footprint, had some 1600 seats, so the Supurba might well have been both fancy enough and large enough to qualify as a palace, though not on the scale of the Mark brothers 1914 Mark Strand Theatre in New York, the approximately 2500 seat house usually considered the first movie palace in the U.S.

The Strand, however, had a stage large enough for vaudeville (the Supurba may have had one as well), so the Marks were clearly hedging their bets. The Kinema had only a vestigial stage, seven feet deep (see KenRoe’s comment on December 14, 2004 above). I don’t know if there were any other theatres of the Kinema’s size built in that era that had no provision for the staged “prologues” which had, by 1917, become a standard part of movie presentations in the country’s movie palaces.

I sould sure like to argue with the person who set the obviously arbitrary size of 2500 seats. I know of plenty of 1000-1500 seat house that are, in every sense of the term, a movie palace.

For that matter, there are plenty of very ornate theatres of less than 1000 seats that are also, unquestionably, a movie palace product.

2500 sounds like some term assigned by a newspaper reporter—undoubtedly a person who would also say that anything built before 1930 or after 1910 as “art deco”.

As to Talley’s, there is one fact that cannot be denied of it—the largest silent film accompaniment organ in the LA area. It was larger than the 1921 32-rank Wurlitzer in the Metropolitan/Paramount, and was larger than the 37-rank Kimball organ transplanted into the early 1930s Wiltern. While the Wiltern and Metropolitan instruments were unit organs, Talley’s was not. Doesn’t matter; in shear number of pipes Talley’s Murray Harris won the battle. It is a pity that early instrument did not survive; for that matter the 5 manual Morton in the Kinema as well.

I guess the question is, what makes a movie palace? I read somewhere a figure of 2,500 seats, which would exclude the Million Dollar. (And indeed the Los Angeles Theatre, so surely architectural and decorative style is also part of the answer.) It sounds like the Kinema was halfway there…

But no, I don’t think Tally’s came close. He made the first dedicated space for projected movies at the back of his Phonograph Parlor, in 1896; his 1902 Electric Theater on Spring Street was the first standalone, purpose-built movie theater in the country; and he may or may not have opened the first movie theater on Broadway. He also seems to have owned the Kinema right at the end of his career, sometime after he’d announced his retirement.

Wasn’t Talley’s Broadway Theatre one of the earliest LA purpose-built movie palace? I don’t think it had a stage and certainly had a large 4m Murray M. Harris organ built in LA. Seems to me the year was around 1910.

I figured both were possible – that the LA Times might have been boosting the figure, and that the seat numbers might have fallen over time, with refurbishments and redesigns…

But bottom line, we’re sure this wasn’t the first purpose-built movie palace in Los Angeles?

And some theatre chain refitted theatres with newer wider seats during the mid to late 30’s. So seating capacities could change during that era.

Pre-opening publicity gave a seating capacity of 2500 for the Kinema. The Times article on the occasion of the grand opening probably used that number because the paper had used it in earlier articles about the project. Owners often exaggerated the size of their proposed theatres. There are later articles that gave lower seating capacities for the Kinema/Criterion. One 1928 article in Exhibitor’s Herald gave the seating capacity as 1680. In fact the house was probably always in the 1700-1800 range.

Could it have lost so many seats by the time of the 1941 Film Daily Yearbook, and the Theatre Historical Society of America record (cf Ken Roe’s comments, Dec 14 2004)?

I posted another ad over on that page. Thanks.

730 S. Grand was the address of the Mozart Theatre, which apparently was the only theatre in history to change its name more frequently than it changed its program.

An ad a few weeks later puts the Brooks Theater at 730 S. Grand, so it apparently has no relation to the Criterion.