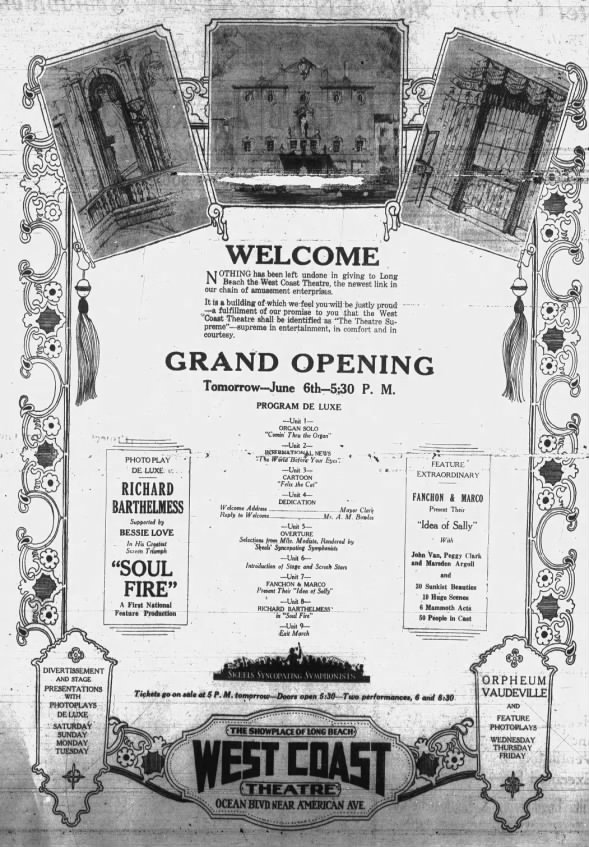 I was there for a concert in 1972, it was Its A Beautiful Day as the headliner. Elvin Bishop was second billing, that’s when he had Jo Baker as vocalist. The opening act I never ever forget and to this day I cannot find anything on them, it was a band from frisco I think called ‘Grandma’ Its was just a bass player who played leads on his bass and a drummer who was this small guy with a mountain of drums all over his drum kit and he could play them all. He did his drum solo and played the wooden floor also, the theatre was such a beautiful place and the acoustics were awesome. Great historic things are always gone for the reason that they are old. Nothing is sacred any longer and its all about money money money.. Too Bad..

Circa 1953 photo added, courtesy of the AmeriCar The Beautiful Facebook page.

The Long Beach United Artists was demolished sometime between Spring, 1981 and Summer, 1982. I remember seeing it still standing and operating in ‘81, but I had no camera with me. When I returned to take photos of Long Beach theatres in mid-Summer, 1982, it was gone. The Roxy, State, Palace, Imperial, and Fox West Coast were still there, and I shot them except the State, which I happened not to notice, I believe, because the marquee was gone, and I didn’t remember it from my early childhood.

Here’s a couple of hand bills from the rock concert era:

It is the United Artists Long Beach Theater /theaters/2032/, a lovely art deco theater that was torn down probably in the early 1980s. There’s a picture here: View link

There’s a “Fox West Coast” roof sign on the right of this photo:
View link

Now to figure out what the theatre in the foreground is…

Nice photo too bad the bus is in the way.

The West Coast can be seen in this 1968 photo from the Long Beach Library:
http://tinyurl.com/26rpeas

Here is a December 1959 ad from the Long Beach Independent:
http://tinyurl.com/quwyfo

This is a 1983 photo. Adult theater “The Movie” is next door.
http://tinyurl.com/cd4ygr

This is from the LA Library in 1986, before the demolition of the Fox. If the link doesn’t work, let me know, as it shows up fine for me.
http://tinyurl.com/cerkml

A woman carrying a knitting bag and wearing a decorative bandana over her head held up the cashier of the West Coast Theater in Long Beach and escaped with more than $100, Long Beach police reported.

Miss Betty Courim, 20, told officers the woman walked up to the ticket window Saturday night, placed the knitting bag on the counter and said, “I have a gun in this bag. Give me all the bills”. Miss Courim said she handed over the cash, and the woman stuffed it into the bag, then hurried away. The woman was about 35 or 40, slender and was wearing a “shortie” coat.

LONG BEACH, Dec. 21-A lone bandit robbed the West Coast Theater of $1200 here tonight and escaped after a score of theatergoers had chased him several blocks. The robber intercepted manager Lester Fulton as he left the box office with a bag of money, on his way to the office of the theater on the second floor.

The bandit took the bag from Fulton and then forced him into the office and locked the door. While Fulton was attempting to telephone the police from his locked office, the robber walked down the steps and out through the lobby to the street.

Miss Beatrice Lyndon, cashier, who had turned the bago over to Fulton a few minutes before, recognized the money sack in the hands of the bandit, who calmly walked past her. Miss Lyndon instantly became suspicious and called to several men in the entrance of the theater. The bandit heard her and started to run. The men chased him for two blocks, but he escaped.

C.T members might like to know, The Mighty Wurlitzer from the Fox has been playing almost every weekend for the last 50 years this year at Old Town Music Hall in El Segundo Ca. The Fox might be gone, but its voice can still be heard.

Lisa…Could you please send me a picture of the FOX letters..please send to the following email address. thanks Lisa

I’m selling the FOX sign (see above post from LisainLongBeach) from this theater. It’s basically the letters FOX that were on the marquee at the front of this theater (shown on the photo above).

There were only a few items saved when this great theater was demolished and this FOX sign is one of them. It originally housed neon lights. The fittings are still there if you want to restore it to its original coolness.

I also have 3 original articles from the LB newspaper with articles and pictures of the theater being demolished (3 consecutive dates).

This historic piece of FOX theater and Southern California history can be yours for only $300!

I will send a picture if you email me.

Only if we could get the Way Back machine up and running again. :)

Nothing but hotels and office buildings on that stretch of Ocean today.

You can also see the United Artists Theatre, one block away in that picture.

The West Coast can be seen just east of the Municipal Auditorium in this photo from the USC archive:
http://tinyurl.com/3968al