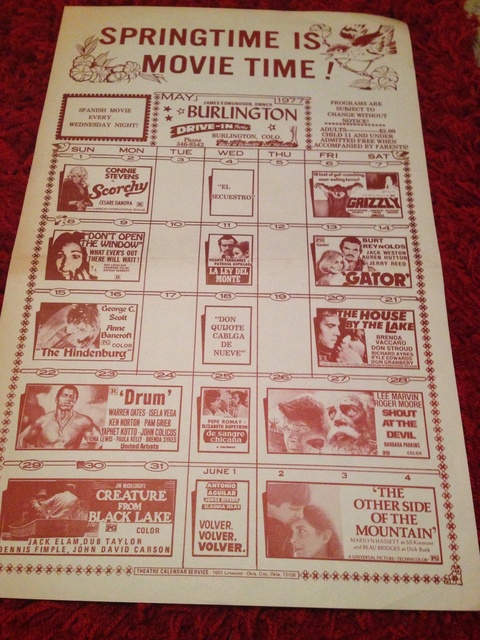 The Burlington Drive in was located in the East part of Burlington, Colorado on Road 52, just north or the railroad tracks. It was opened in May 1976 and operated until at least 1988. The screen, ticket booth and speaker poles have been demolished and a house and barn are now constructed in the paring area.

The red and white, one story, steel constructed projection booth still stand and are used as a workshop for the house on the property. The current owner of Burlingon’s Midway Theater used to work as a projectionist at the drive in. The drive in had Brenkert projectors but all of the consession and projection equipment has been removed.

Although not confirmed by any topographical map that I could find, this is apparently the property on County 52 just north of the railroad tracks. No trace of the drive-in remains, but the property does have the general shape of a drive-in. https://goo.gl/maps/UeBZp

Visible at the location described in a 1980 Historic Aerial.

The Burlington’s first appearance in the Motion Picture Almanacs' annual drive-in list was the 1980 edition, and it stayed there through the final MPA list in 1988. There was never a mention of capacity. The owner was J. Edmundson.

From Anthony L. Vazquez-Hernandez’s photo (thanks!), we know that the Burlington was active in May 1977. I just uploaded a grainy USGS photo that shows that the viewing field was complete by June 11, 1976. What I didn’t upload was an equally grainy USGS photo taken June 23, 1975, which showed the site as untouched pasture.

A tiny note of Page 2 of the May 6, 1976 issue of the Burlington Record pointed out that “Burlington’s new Drive-In Theatre, owned and operated by Edmundson Theatres, is now open for business.” The drive-in’s ad, not mentioning a grand opening, listed the double feature of “The Killer Elite” and “The Wind and the Lion.”

I failed to find any mention of the drive-in in August-October 1975 issues of the Record, and May 6 was apparently the drive-in’s first ad.

On the other end, the Burlington’s final ad in the Record was Aug. 1, 1985, announcing that it would close for the season after Aug. 4, an unusually early closing. I couldn’t find any ads for it in summer 1986.