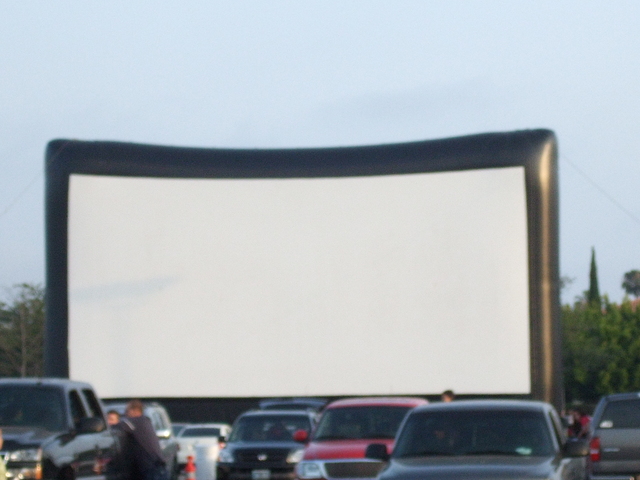 This drive-in opened on May 18, 2007, featuring a 65 foot inflatable screen. The premiere feature was “Shrek the Third”. The drive-in was due be open year round but will close during the annual Orange County Fair. It never re-opened.

Unfortunately, this drive-in was forced to shut down after less than a year in operation. Constant interference from other Fairgrounds activity – most notably the Fair itself which caused the theatre to shut down during the prime months of July & mid-August – led to it’s demise

Pics I uploaded were from opening night of this short lived D/I. Opening feature was “Shrek The Third.” They initally only showed 1 feature but after a short time they started showing second features…but the catch was they charged separate admission and cleared out the entire lot once the first feature was done.

I see no good reason why they couldn’t try this again at an abandoned Circuit City lot or someplace. All they need is a troth of port-a-potties and a couple of food trucks and BOOM! :)

Just my opinion, but a blow-up screen inside a parking lot is not a drive-in theatre, and does not belong on this site.

Well they did run 1st run films only, not DVD’s of classic films (like the inexplicably popular Electric Dusk in Downtown LA). It was a grand experiment to recreate a classic experience. But it wasn’t meant to be.