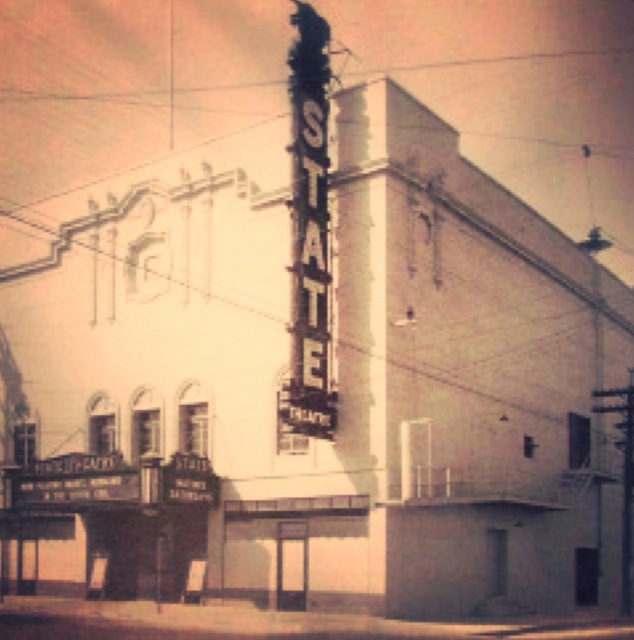 The State Theatre, designed by the firm of the Reid Brothers, opened in 1926 at Ferry Street and Ward Street. It closed in 1931 due to fire damage, but was remodeled and reopened a year later. It operated until 1969. Since 1998, the building has housed the Contra Costa County Public Defenders office.

In 1933, the State was operated by T&D Enterprises, according to this article from the Oakland Tribune:

MARTINEZ, Dec. 18â€"Sale of the Avalon Theater to T & D Jr. Enterprises, operator of the State Theater, Martinez' second playhouse, was announced today. At the same time it was stated that the Avalon will be closed temporarily for repairs. J. N. Tocchini, who opened the Avalon two years ago, will devote his interests to theaters which he operates in Napa and Santa Rosa.

All exterior cast ornament on the State Theatre building was preserved in its conversion to the Contra Costa County Public Defenders office. It still looks very much like a theatre, with a very obvious fly tower, as well as the theatrical urns and cornicework. Sadly, the corner marquee, still extant circa 1995, and photographed by me, did not survive the conversion. It was one of those zig-zag Thirties Fox West Coast jobs, with its red and white striping faded but intact, but hardly a scrap of neon clinging to it. Likely, its retention would have made a County office building just a little too festive.

In the vintage photo on the abovementioned link to the site showing historic buildings of Martinez, it is clear that the vertical sign is of the style often used by T&D in those days—California poppies done in lightbulbs, with a bouquet of poppies at the top. Most of these signs were for theatres named “California,” but appeared on other names in the T&D circuit. The only two signs I know of so styled in existence are an original example on the California in Dunsmuir, and a carefully-designed replica on the California, San Jose.

I should mention that the State’s entrance was moved to the corner of the building nearest the viewer in the 1930s remodel. That’s where the battered marquee mentioned in my previous post was located. Also, the entrance walls featured shiny black tile from sidewalk to soffit, with some turquoise and other colored tiles as accents. This tilework, like the marquee, was removed, and the entrance centered back where it was in its first years as a theatre when the office conversion took place.

I loved this theatre as a kid. The info says it closed in 1961 but I went there on many Saturdays in the mid-sixties. In the late sixties it was used for rock concerts

In the mid-seventies, I worked for a woman who had the original marquee. I recently (Dec 2007) went back to the Bay Area for Christmas and drove by where the woman stored it. Oh my God!!! The marquee is still there!

Oh how I wish I could restore it.

Building and Engineering News of October 17, 1931, reported that the original 1926 plans by Reid Brothers would be used in the rebuilding of the T&D Junior circuit’s State Theatre in Martinez.

Was this the State? I know that West Coast took over the original Turner & Dahnken circuit sometime in the 1920s, and that the later T&D Jr. circuit later took over a number of West Coast houses in northern and central California, but I’ve never found the exact dates of these events.

According the the Martinez Historical Society and Citizens who last attended a film at the Statue Theatre, these are the dates that come up:

A very magical looking old theatre. Marquee is handsome. Too bad it is not still open and running.