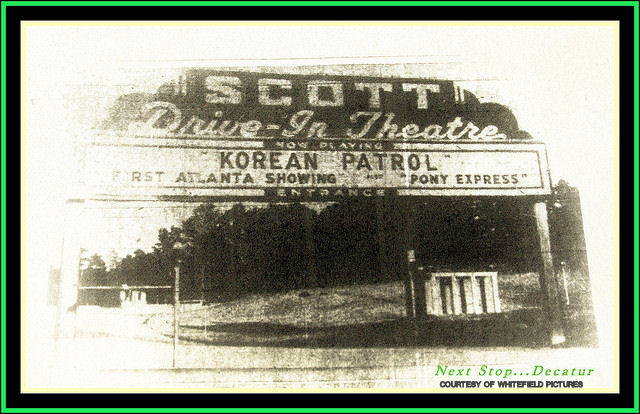 Located at Scott Boulevard and Lawrenceville Highway. The Scott Drive-In opened September 3, 1951 with Richard Emory in “Korea Patrol”. It was closed in 1977.

Here is one of the photos I have been looking for.
http://flickr.com/photos/24391992@N00/2751548334/
First Drive-In Theatre in Decatur, GA. opened in Sept. 1951
The above picture of the entrance of the Scott Drive-In was located at the corner of Scott Blvd. & the Lawrenceville Hwy.
This is a newspaper article about the Grand opening of The Scott-Drive-In Theatre.

A new asset to Decatur’s impressive list of modern business establishments has been added in the Scott Drive Theatre at the intersection of Scott Blvd and the Lawrenceville Hwy.
Set in a natural amphitheatre and partially enclosed by a cresent-shaped backdrop of trees, the new drive-in is one of the most beautiful anywhere in the south. It opened Monday.
With 550 automobile positions, the new outdoor movie has 12 parking ramps. Elevated and tilted to give the viewer just the right view of the screen, the ramps are close enough so that customers at the rear can get a clear picture.
Community Theatres Corporation who built the new drive-in have secured the very latest of equipment and designs for their movies.
Frederick G. Story, president of Community Pictures, says that the Scott’s big concession stand is probably the best designed in this area.
We studied many oother drive-in concession stands and elimated all of their mistakes in ours he said.
Features of the concession house are the comfortable rest rooms, public telephones,cigarette machines and cafeteria style service.
The sound equipment the speakers which the drive-in customer hangs from his auto window is R C A which Mr. Story says is the best of it’s kind. And he adds that the Scott’s movie screen is the largest in the Metropolitan area.

The opening night had some 550 cars which is a full house.
1000 cars were turned away that first night.

The Scott Drive-In was one beautiful drive-in theatre! With 550 car spaces this theatre was a real entertainment complex for the Decatur area! In the 50’s and 60’s the drive-in had a marquee that went over the entrance road. In the 70’s the Scott got a newer marquee that looked almost identical to that of the Glenwood Drive-In. The newer marquee sat between the entrance and exit roads. I remember they had a playground down by the screen. They also had a storage shed that looked like a little mansion where they stored the letters to change out the marquee. All in all the Scott Drive-In was truly a wonderful drive-in theatre!

I have started a site dedicated to The Scott Drive-In Theatre.
http://scottdriveintheatre.blogspot.com/

Here are two aerial views of the Scott Drive-In from the Atlanta History Center collection:

The second one is undated:
View link

Newspaper ad from August 1964 with a write up on the feature for that night:

This opened on September 3rd, 1951. Grand opening ad in the photo section. 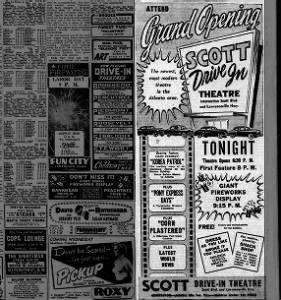