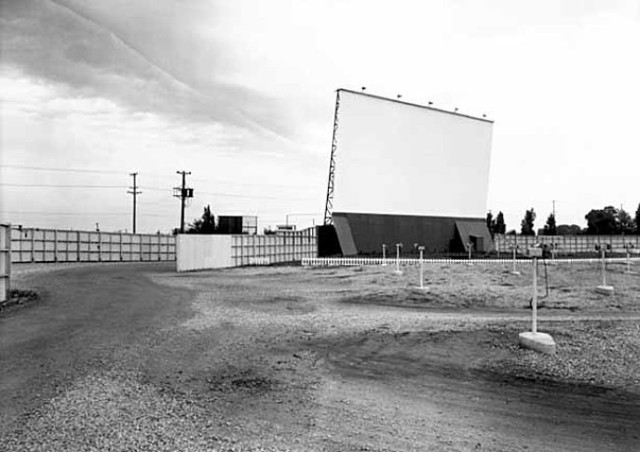 Located on E. 78th Street between Portland Avenue S. and Old Cedar Avenue S. in the Bloomington district of Minneapolis. This was the first drive-in in Minnesota and it was opened prior to 1948 when it was operated by Charles Rubenstein of United Theatres Corp. It was closed in September 1975.

I’ve researched the Drive In, but have had little luck. It was bound by the frontage road of 494, 12th Ave, and 78th St. (now called American Boulevard). I was born in 64 and we lived in the four plexes across from Met Stadium, next to Gem Store. It was a lovely, new area at that time. My sister worked across the street at Control Data. Most of our neighbors were Twins/Vikings/Airline Pilots and Flight Attendants, now I belive this is the slum of Bloomington. The Collins (Mildred and William) owned a traveling carnival and stored all of the equipment in a vacant lot behind the drive-in and next to the Collins Mobile Home Court (currently Walmart). All Collins are deceased and their only son died many years ago, in his early 30’s. So, I’m very curious as to what they owned in that area. There was also a Masonic Lodge on the Frontage Road behind the mobile home court. I know around 1994 the park closed and construction began on the Walmart. According to my research, the mobile home park opened sometime in the late 40’s. I don’t recall when the drive-in was closed. The buildings that are currently located where the drive in was are looking mighty old…so I’m assuming the drive in closed in the early to mid 70’s. I don’t remember Smokey Point, just France Ave. Drive In. Never went to Queen Anne either, but have read much about it. I have seen pictures of a Rib joint on Cedar pre-stadium. Anyone out there who knew the Collins or has info. regarding what they owned in Bloomingon, I’d really appreciate a response.

The Bloomington Drive in was located on the south-west corner of 494 and 12th Ave South. My father worked there as a projectionist in the early 60s. I remember my mother taking my brother, sister and I (dressed in our PJs) to the movies and staying until dad was off work. I have to admit, I do not remember the trips home. lol

I remember this theater and I was born in 72 so by the time the early 80’s came around when I was old enough to remember stuff and pay attention. This theater was still running, although at the time I remember it, it was called Southtown. The same namesake they used from the strip mall that sits in the same spot now, which is right across 494 from the Best Buy HQ.

Sorry Chevelle SS guy the theater you are talking about was the Southtown Theater.The Bloomington Drive Inn was at the S.W. corner of 494 & 12 th ave andit closed in the early to mid 70’s.

I remember this theater quite well. I lived in the shadow of the Met Stadium in the sixties and could literally walk to the place. I would walk to Town and Country shopping center to the soda fountain at Atkinson’s Drug store, or for a pizza at Pizza Papa’s, or play piball at Stadium Bowl, which was just west of the theater. I used to ride my bike into the exit at night and watch the movies for free (until I got caught and thrown out). Later, when I had a car, it was a great place to take a date. We usually either went to the Bloomington Drive in, or to the Lucky Twin in Burnsville. Later on they build the Mann France Avenue Drive in, and that became the place of choice.

I remember Collins. He was a large man who seemed to like painting. I was caught cutting through the area where he stored his “Collin’s Shows” stuff, and brought to his house, which was situated at the edge of the trailer park. He was painting a landscape at the time. He really wasn’t a bad guy. He gave me what for, but he wasn’t overly rough about it.

ChevelleSSguy. The theater you’re referring to was the Mann Southtown. The mall was already there and had been long before the theater was. At the time the Best Buy property was a series of new and used car lots. The Mann Southtown had a terrific movie screen and great sound. I saw my first James Bond movie there.

I grew up in Richfield in the 1950’s, I clearly remember the old drive in theater. Also the Collins carnival in that area, which had batting cages, and other sport activities there. At the SE corner of 78th and Portland avenue was a gas station, then heading East,a Dairy Queen then Stadium Bowl. At some point in the mid 60’s, a place called ‘The Alps’ was built. It was a hang out for those in there twenties. It has music and served beer.

The address listed is incorrect. It is now in Minneapolis.

I remember staying in a hotel with my parents as a kid, right next to the Drive-In. If you went to the end of the hall, or were lucky enough to have a window on the right side of the building you could see the movies.

The Bloomington Drive-In Originally Had A Capacity Of 1,000 Cars Since Its Construction. The Theater Had A Huge Amount Of Headlines Since Its Opening Around The Week Of August 26, 1947. Bloom’s First Drive-In Was Not Just A Drive-In Theater, But It Also Housed As A Drive-In Church For Most Of Its Life As Well.

It Was Closed In September 1975, And Was Demolished Afterwards To Make Way For A Garage.