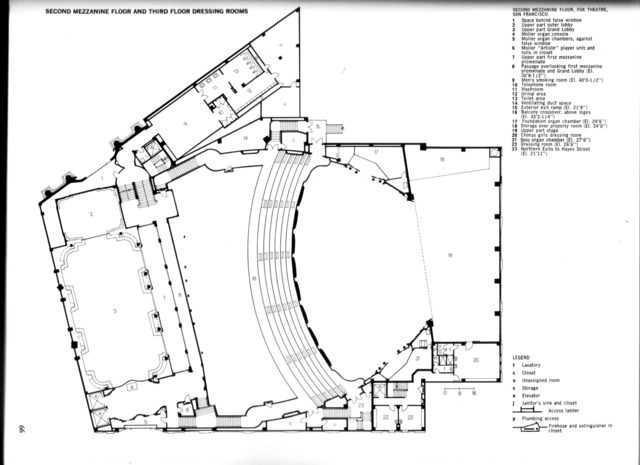 Called “The Last Word”, the Fox Theatre in San Francisco opened on June 28, 1929 as one of the grandest theatres ever built for the showing of motion pictures. The opening film was a world premiere presentation of “Behind That Curtain” starring Warner Baxter. The 4 Manual, 36 Rank, ‘Crawford special’ Wurlitzer organ was opened by organist Jamie Erickson, and the 3Manual, 12 Rank Moller organ, located in the Grand Lobby was opened by Erma Falvey.

The Fox Theatre was designed by Thomas W. Lamb for William Fox and his Fox Circuit, who made sure his wife, decorator Eve Leo Fox, was kept at arms length. Fox West Coast Theatres were the operators in association with Loew’s Incorporated.

The Fox Theatre was meant to be a part of a large office complex, which was never finished.

According to "Great American Movie Theaters" by David Naylor, the Fox Theatre was similar, but more grand, in detail to two other Lamb designed theatres, the Midland Theatre in Kansas City, Missouri, and the Loew’s Jersey Theatre in Jersey City. The Fox Theatre was apparently copied in 1932 by S. Charles Lee for the Los Angeles Theatre. The Los Angeles Theatre looks much like the Fox theatre, just on a smaller scale.

Due to the decline in people going to the movies in the late-1950’s and early-1960’s, the Fox Theatre was closed on February 15, 1963 with Boris Karloff in “The Raven” and Carl Boehm in “Peeping Tom”. A special final show “Farewell to the Fox” was staged on February 16, 1963, attended by many Hollywood film stars and personalities. Before demolition, the interior furnishings and decorations were auctioned off on February 28, 1963. As the auction was proceeding inside the theatre, the demolition contractors crane was poised on the outside, ready to commence its work on the theatre. Demolition was completed on August 12, 1963, and it was replaced by a modern skyscraper, named Fox Plaza.

Copies of the Hardcover 372-page book “FOX, The Last Word - story of the world’s finest theatre” written by Preston J. Kaufmann in 1979 (costing $35.00), about the Fox Theatre from its construction to its demolition are now considered rare and are selling up to $1250,00 for a single copy.

My mother recently passed away at age 98 and when I cleaned out the attic of her garage I discovered 12 authentic theater seats from the original Fox Theater in San Francisco. These are evidently collectors items my dad bought in the early 60’S when they tore down the old movie palace. This row of theater seats is now 85 years old and still has the original undamaged steel structure, red corduroy backs, and hardwood arm rests. They need to be restored and reupholstered after all the years of heavy use at the FOX but they could be quite a conversation piece in a home theater for someone.

Does anyone have any idea what these 12 seats could be worth to a movie buff?

In 1963 I was the Capt of the Ushers Mr.Zotera appointed that to me as he liked me and he was not a heterosexual! He caught me making out with an Usherette in the bathroom and fired me!

Underneath the Stage was a row of small little wooden door makeup rooms for the movie stars that came to the theater to perform. Black and white autograpgh photos were hung in each room by many famous big name stars.

2 photos added via the San Francisco Remembered Facebook page. One is a demolition pic from 63, the other undated, but likely late30’s.

Scrolled back to 2008, and don’t see that this link was posted previously. It has demolition footage of the Fox.

The Fox was the best looking theater and the largest in San Francisco. Frequently, I would enjoy a Saturday afternoon matinee which cost about 25 cents in the early 1950’s. You get get a soft drink, popcorn and candy for 50 cents. The Fox had so many levels to the balconey you could walk up three and four levels to the top of the world and the screen from the upper level looked like a small postage stamp. The Fox was a little displaced since most of Market street theaters were between seventh&fifth and market but she still had a strong following. When it came time to demolish her some city leaders dicussed using it for the SF Opera but that never materialized. In fact, it was during her final hours that they located some vagabond living in the attic who had been there sometime (if my memory recalls). It certainly was a San Francsico Treasure lost in time. We will never see another Theater with her grandeur and charm!

A B&W trailer for the Fox’s “First Anniversary Show,” with musical accompaniment played on the theatre’s Wurlitzer organ, can be viewed here

as grand as this theater and the Roxy in Manhattan were they were doomed with a capital D the second t.v. became commomplace in the American home.

A homeowner in the Balboa Park district of SF has found original blueprints of the Fox in a cabinet in her garage. She has arranged to donate them to the SF Public Library’s History Center.