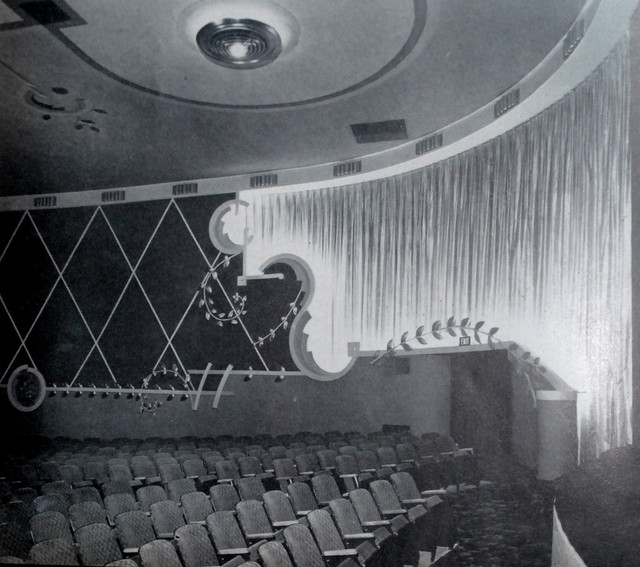 Located in Los Angeles' Westchester area, near LAX, the La Tijera Theatre seated 1,530 people when it opened on January 12, 1949. It was one of architect S. Charles Lee’s later theatres. It was closed in the early-1980’s and after a long stint as a bowling alley, today it houses offices.

Here is an undated photo:
http://tinyurl.com/yqsjjr

The La Tijera Theater has been sold for approximately $300,000 by the Mo-Kan Theater Co. to J.T. Tregoning, Raymond Tauber and Vincent Rehers. The building will be converted into a 16-lane bowling alley with a cocktail bar and cafe. The alley will open in January.

This is from the LA Times in January 1949. The La Tijera ad is at the bottom of the page. Click on the ad for a better view.
http://tinyurl.com/car6j4

Here is a January 1949 ad from the LA Times:
http://tinyurl.com/lq6qce

Didn’t last very long as a theatre. Maybe they were offered a price for the property that they couldn’t refuse.

There was a problem with licensing films during that time in that area of LA. The Paradise Theatre brought an action againist Fox West Coast Theatres, 20th. Century-Fox and Loew’s Inc.. It was about a conspiracy to refuse a license for a 7 day run in Inglewood and Westchester areas of the city. The jury found there had been a conspiracy between Fox West Coast Theatres, 20th. Century-Fox and Loew’s Inc. to refuse to the Paradise Theatre a right to license a non-exclusive 7 day run without competitive bidding between Sept. 18, 1950 to Sept. 17th 1951.
So that maybe one of the reasons why it was a theatre for a short time.