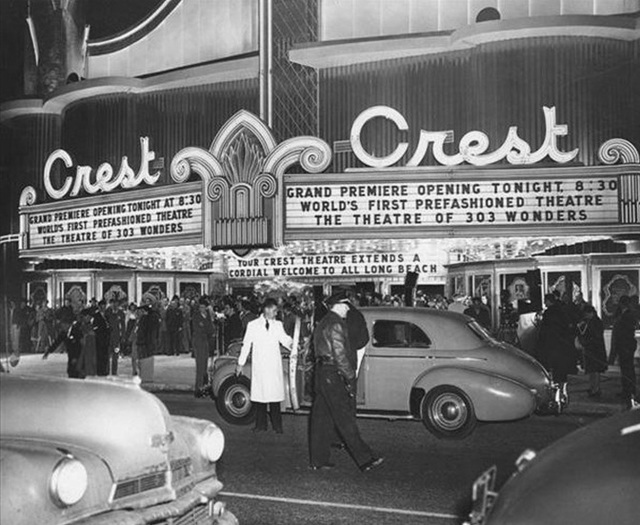 This theatre was the world’s first pre-fashioned theatre.

This was also the first prototype for Fox Theatres in the Quonset Hut style, and opened January 23, 1947 with James Cagney in “13 Rue Madeleine”.

Fox was looking for an easier way to make theatres fast and cheaper after the war.

The Crest Theatre had a main floor of seats, then an early form of stadium seating in the rear (like later Fox houses such as the Fox Loyola Theatre).

The opening manager’s name was Harry Francis, who would go on to manage many other Fox and Mann Theatres till the mid-1990’s.

Harry managed the Crest Theatre for a long time. He also managed the Fox Village Theatre in Westwood, and opened the nearby National Theatre. His last theatre was the Bruin Theatre.

He worked for over 50 years in theatre management.

The Crest Theatre was closed on February 2, 1977 with Jeff Bridges in “King Kong” & Jogn Carradine in “Big Foot”. It became a church, but has since been demolished.

I remember the Municipal Auditorium, the original Pike with the Plunge and the Public Library in Lincoln Park and of course, the Pacific Electric Red Cars. I also remember when they were shooting the movie, ‘It’s a Mad. Mad. Mad, Mad World.’ Does anyone remember the 5 cents per scoop of ice cream at Sav-On drug stores? (On a side note, the end of the movie, ‘The Beast From 20,000 Fathoms’ was shot at the Pike, not Coney Island.

My late friend, Joseph Musil, who owned the magnificent American Museum of Theatrical Design (aka: Salon of the Theatres) in Santa Ana, managed to rescue some of the wonderful brass floral lighting which traversed the ornate lobby and auditorium.

I also wonder what happened to his incredible collection of photographs and 35mm slide collection of historic southern California theaters, especially of Long Beach?

What a beautiful theater….Great marquee.

Hello Tinseltoes… Sorry, I cannot download your photos. I’d love to have seen this theater!

I worked for Mr. Francis near the end of his career at the Bruin. Great man.

Does anyone have a photo of Harry Francis? I went to The Crest in the 1960s as a kid and remember a short, balding man working there all the time but don’t know if this was him or not. I’d remember if I could see a photo. Thanks.

That was Mr. Francis. Although, I don’t recall him balding. He had curly hair. He loved the kids and would put on a Saturday kid’s show every week. He refused to play monster movies because he said our mothers would complain. But they always showed a film, “Crazy Races”, about ten or twelve cartoons (the last one they would run upside down and backwards) and they had birthday cake for any kids who had a birthday during the week. He would stand on the stage with a microphone after the movie and give out the cake and prizes for those who had the winning number for “Crazy Races.” Very fond memories. Happened to be next door today to where the Crest once stood. Added a picture of what the block looks like now.