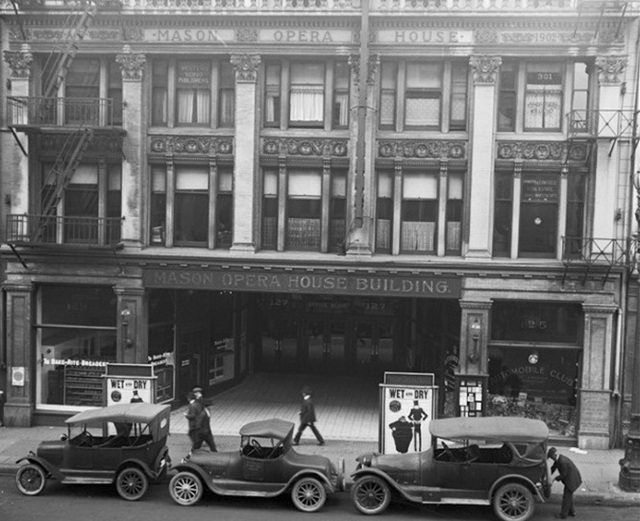 The Mason Opera House opened on June 8, 1903 and seated 1,600 people. It was a drama theatre, designed by architect Benjamin Howard Marshall of Chicago based architectural firm Marshall & Wilson. Seating was provided in orchestra and two balcony levels.

Remodeled in 1924 by the architectural firm Meyer & Holler. It was leased to RKO in 1930 who still used it as a playhouse. By 1932 it had been equipped with a 3 manual Wurlitzer theatre organ. Later known as the Mason Theatre, by 1944 a projection booth had been built at the rear of the 2nd balcony and from 1945 it showed Spanish-language films. The theatre was closed in early-1955 with Columba Dominguez in “Pueblerina”. It was demolished in 1956.

I’ve just noticed ken mc’s comment on the Pacific Electric Theater above. All my knowledge of the place comes from a conversation overheard between two bus drivers in the 1960s. As our bus was pulling into the 6th and Main station one day, the driver was telling a much younger off-duty driver riding to work that, back in the Pacific Electric era, he had gone to union meetings held the old P.E. Theatre next to the station. Apparently Metropolitan Coach Lines and then the MTA had discontinued the policy of letting the union hold meetings there.

The primary function of the place seems to have been business related, in any case. I had no idea they’d ever shown movies there. From the description of the event, it sounds like the company let Mr. Ferenz four-wall the house. I wonder if that was done frequently?

This is from the Arcadia Tribune in February 1932:

Fortune may return to this famous old theater on February 15 for on that evening “Shining Blackness” will open the Broadway theater with Lucille La Verne as the star, Helene Millard being among the supporting cast. The play is by Lulu Vollmer and Arthur Collins is the producer which means a fine production will be offered Los Angeles playgoers.

Miss La Verne has not been starred locally since “Sun Up” when she gave a memorable performance. It is to be hoped good fortune will perch on the banners of the old Mason Opera house, which has been closed for many weeks.

The 1947 project has a nice video clip on this page:
http://tinyurl.com/nq2jt8

Arthur Spitz, Hungarian-born showman, has taken a three-year lease on the Mason Theater on Broadway near First St. and will present operettas at popular prices, he announced yesterday. The impresario intends to hire prominent singers, a chorus of 24, a line of 16 girls and a 24-piece orchestra.

Adding further novelty, Spitz says, â€œIf anyone gets hungry during the intermission, we can take care of that too. There will be a five-cent buffet at which one can get anything from a hamburger to roast turkey.â€

The not-unfamilar procedure of putting attractions to a popular vote will be followed by the producer. The public will be allowed to choose from a list including â€œThe Merry Widowâ€, â€œBittersweetâ€, â€œShow Boatâ€, â€œRose Marieâ€ and â€œThe Desert Songâ€, Spitz revealed. Two shows daily are scheduled, with an owl performance on Saturdays. Spitzâ€™s publicity representative has labeled the enterprise â€œThe Woolworth of the Operetta.â€

I have been told by my mother and 99-year old aunt that my uncle, Guillermo Gonzalez at one time sang opera at the Mason Theatre in Los Angeles. They said that his name was already appearing in posters at the time. I also found an old thick record where he sang “Payasso”. Would anyone know where I can search for any archives of old Opera Programs, Posters or anything that may have his name on them? I know he would have probably have performed at this theatre around the late 30’s or 40’s.

I have been told by my mother and 99-year old aunt that my uncle, Guillermo Gonzalez at one time sang opera at the Mason Theatre in Los Angeles. They said that his name was already appearing in posters at the time. I also found an old thick record where he sang “Payasso”. Would anyone know where I can search for any archives of old Opera Programs, Posters or anything that may have his name on them? I know he would have probably have performed at this theatre around the late 30’s or 40’s.

Here is a Sanborn map from 1906 showing the orientation of the Mason Opera House:

The Mason is on the right in this 1952 color photo:
http://tinyurl.com/y5azump

Theater architect Clarence Blackall wrote an article about theaters for the February, 1908, issue of the architectural journal The Brickbuilder. One of the illustrations is a main floor plan and cross section (with the auditorium turned 90 degrees in the cross section) of Benjamin W. Marshalls' original plan of the Mason Opera House.

It can be seen on this web page (click the + sign in the toolbar at the bottom right of the page repeatedly to enlarge.)

Something I hadn’t known about the Mason Opera House is that the various levels were reached by inclines rather than stairs. That was a rarity in California theaters. As far as I know, the only other house in the Los Angeles area that had ramps to the balcony was the Raymond in Pasadena.

Film historian Mary Mallory, writing at Larry Harnisch’s weblog The Daily Mirror, has posted as part of her “Hollywood Heights” series a long (and very interesting) article about art director and costume designer Max Rée in which she mentions in passing that he was responsible (apparently sometime around 1930) for upgrading and redecorating the Mason Theatre.

Rée, who trained as an architect, was one of the movie set designers who had considerable influence on architecture and design in general during the period. Photos of the Mason’s interior from the 1930s must show Rée’s work.