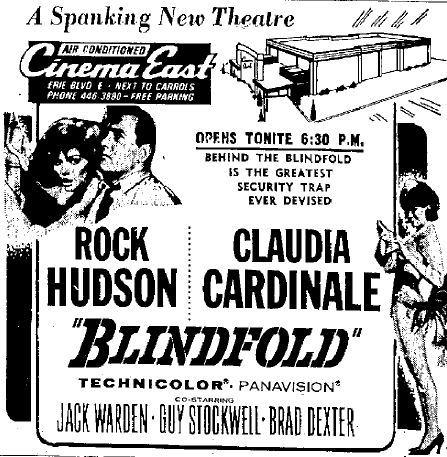 Loews was the last operator of the deluxe Cinema East, a huge cinder block building housing a giant screen and just under 1,200 seats. The theater opened on May 27, 1966 with Rock Hudson in “Blindfold”. It was first operated by Carroll’s Development Corporation, which later became CinemaNational. USA Cinemas took over in 1987, then Loews in 1988. The theater closed around 1991 and was demolished.

In it’s last years, the ceiling tiles in the auditorium were removed because of the leaking roof. Tiles were falling on people as they watched films. This did wonders for the sound. The theater featured a huge lobby with elegant appointments and was one of Syracuse’s deluxe presentation houses for many years.

Next door, Carroll’s built the first of their prototype, fully-automated, manager-operator theaters, called the Mini One. Later, it became known as the Cinema East 2. So the area at one time held three adjacent theaters–Cinema East, Mini One, and Dewitt Drive-In. All have been demolished.

One of the early films to play the Cinema East was “Torn Curtain”. That would have been 1966.
Bob Throop

I saw ON A CLEAR DAY YOU CAN SEE FOREVER here, and found the place pretty cool. I wish someone had pictures!

I was a relief projectionist at this theater for a few years in the early eighties, having been recruited into the union by business agent and head projectionist Chuck Nelson (this was during the Bob Rodman era at CinemaNational, a fellow about whom you should not get me started). I began there during the original run of Superman 2, and worked at the chain on a part-time basis as I was holding down another full-time job at a local TV station. I also relived at the Cinema North, Westvale and Genesee Theaters, and Dewitt and North D.I.s

For the longest time, the East was the only theatre in Syracuse that was capable of stereo sound; they had a four channel Kintek audio system in the booth, along with two Simplex XLs and Ashcraft carbon-arc lamps. There was also an eight-track player in the booth for non-sync music. There was a large storage area upstairs behind the booth, and the chain wound up moving their offices there about 1981 or so, after they pulled out of the Carrollâ€™s building on James Street. Eventually (and after I was gone), the place went manager/projectionist, with the two projectors being converted from the original 2000â€™ reels with manual changeovers to 6000â€™ reels with the same lamps. The manager was expected to run across the parking lot and do the same job at the Mini. I came back to see Rainman here under this set-up and it was very obvious that they were having trouble keeping the carbons burning evenly for an entire hour, very dim projection and a lot of flicker.

The Cinema East had a Dolby CP50 that was installed fpr “Close Encounters of the Third Kind”. It was mounted in a rack with 4 Kelmar amps. They had an Altec A4 for the center channel and A5’s for left and right. They had 3 Altec 604’s for surround.

In the last few years of its operation, this former deluxe house had a roof with the consistency of a piece of swiss cheese. Loews would not spend any money on the place since the lease expiration date was approaching. The solution to stop the ceiling tiles from dropping on the heads of movie-goers was to remove the tiles! The sound echo was terrible after the acoustic tiles were removed, and the ceiling grid with steel and tin roof exposed! Forget about watching a movie during a rainstorm!

On the night that Indiana Jones and the Temple of Doom premiered, the line stretched completely around the theater an hour before the box office opened. Inside, pretty much every seat was filled.

This opened on May 27th, 1966. The grand opening ad has been uploaded here.

The map markers for the Dewitt theaters including this are all messed up. This Cinema East marker should be further east on Erie Boulevard, roughly in the location currently occupied by Texas Roadhouse, just west of the former Dewitt Drive-In. The current marker puts it west of Thompson Road, which would be officially in Syracuse, not Dewitt. Mini One (Cinema East 2) was roughly where Olive Garden is today. ShoppingTown Theaters should be more than a mile further southeast on Erie, near the end of the boulevard, where ShoppingTown is.