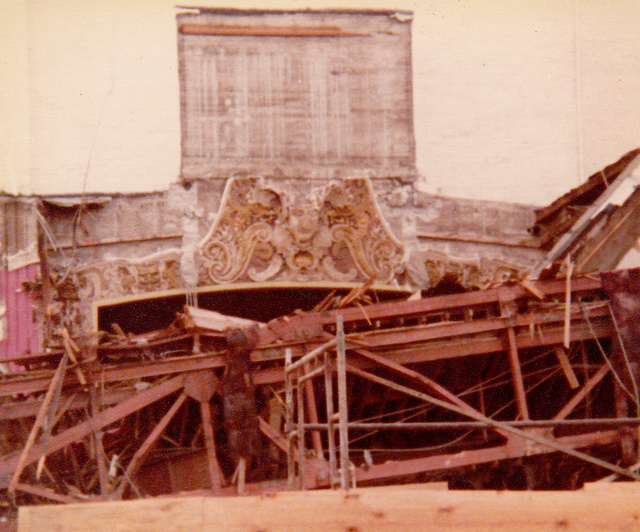 Located on Tulare Avenue near L Street. The Electric Theatre was opened in 1908. In 1909 it was renamed Teatre Tulare and on March 4, 1916 it became the Tulare Theatre. It was taken over by T & D Theatres on September 1, 1923 and was closed for a refurbishment and installation of new projection equipment. It was rebuilt/remodeled in 1926 to the plans of architect Timothy L. Pfluger and reopened on March 18, 1927 with Rin Tin Tin in “Hills of Kentucky” & Lupino Lane in “The Naughty Boy”.

Following further refurbishment, the Tulare Theatre reopened on November 8, 1940 with Myrna Loy in “Third Finger, Left Hand” & Hopalong Cassidy in “"Three Men From Texas”. The theatre was closed by United Artists on August 26, 1975 and was demolished five years later to make way for a new bank building.

I have submitted an entry for Tower Square Cinemas; it should appear soon.

CinemaTour has three photos of the Tower Square Cinemas (the vertical sign seen in one photos just says Tower Cinema) at 50 N. Tower Square in Tulare. The photos are dated 1999. CinemaTour doesn’t give the number of screens, but Mike Rivest lists it as a triplex. I haven’t found it mentioned in Boxoffice Magazine.

A couple of web sites say that the former Tower Square Cinemas building was converted into an indoor paintball venue in 2008, but I can’t find a listing for it on the Internet. Maybe it didn’t last long.

In addition to the Tulare, State, and Tower Square, Tulare had a theater called the El Rey operating from at least 1940 into the 1950s, and a small twin (2x180 seats) opened in the Town and Country Village shopping center in 1973. I found a single reference to a Lake Theatre in Tulare in a 1944 Boxoffice item, but that might have been a misplacing of a Lake Theatre somewhere else— perhaps the one in Corcoran.

There are also a few items about theaters in Tulare that appeared in Southwest Builder & Contractor as far back as 1912, and one of these was probably the first Tulare Theatre, but I don’t know which of them it was. Other projects the magazine announced might never have been built.

Tulare now has a multiplex called the Galaxy Tulare 10, opened in 2004.

I Have fond memory’s of the Tower Square Cinemas, i was about 10 yrs old when it opened, heck i can even remember when the big clock was finished and i could hear it chime from home almost a mile away but they soon turn the VERY HUGE speakers down. I can remember very well riding my bicycle or walking with friends/family.
i loved going to the movies and if i didn’t have money i would just ride my bicycle around the Tower District, when ever i had enough money i would go eat at round table “now VIP” then head to the theater, yes i still bought the popcorn and soda LOL. just around the corner you could walk right up to the glass at B95 = KBOSS and request a song.

The twin towers of the Tulare Theatre still had their Moorish grillwork when this photo from the Huntington Digital Library’s Southern California Edison Company collection was taken by photographer G. Haven Bishop on October 6, 1936.

This opened on March 18th, 1927. Grand opening ad in the photo section.

This theater’s roots date back to its launch as Electric Theatre in 1908. Its name was changed to Theatre Tulare in 1909 and then the Tulare Theatre on March 4, 1916. The T&D Circuit took on the venue closing it in December of 1923 for new projection and a refresh. The New Tulare Theatre was built in late 1926 opening in March of 1927 with former Tulare Theatre owner Paul Reardon continuing as the projectionist for another thirty years.

The Theatre was closed by the United Artists Circuit after showings on August 26, 1975. A major architectural plan was unveiled in 1977 to revitalize the theatre. But a bank purchased the theatre and demolished it in 1980 for a new bank building.

Dallasmovietheaters, the Turner and Dahnken Circuit sold their leases, properties and other interests to West Coast Theaters, Inc. in January 1923, the deal was finalized in March. The corporation was dissolved and the monies from the sale were divided between Hattie Turner (widow of James Turner), Fred Dahnken and his wife, and the Turner and Dahnken children. Any activities associated with former T&D properties after March 1923 were carried out by West Coast Theaters, Inc. West Coast sold to Fox in 1928.