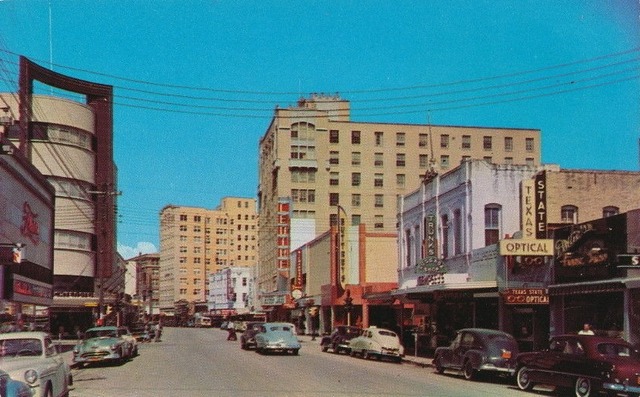 The Centre Theatre finished construction in December, 1941, and was immediately acclaimed as one of the finest of the numerous Southwest cinemas designed by architect Jack Corgan. It was opened on February 10, 1942 with Frank Morgan in “The Vanishing Virginian”.

Here is a description from the 1942 Film Daily Year Book: "The frontage of unsymmetrical design is dominated by a tower with a large center panel of illuminated, rose-tinted Vitrolux glass, divided into 24" squares by aluminum settings. The marquee and four line interchangeable letterboard is vividly illuminated with multi-colored tubing forming a flowing design toward the center. The large, spacious foyer is indirectly illuminated with neon. The walls covered with Avodire Flexwood Veneer give a rich, warm atmosphere. Aluminum display frames are recessed in the walls at various places. Standee area with restrooms off each end has the walls spaciously done in striped peach Sanitas washable cloth. The ceiling is in canary yellow and illuminated with three circular recessed light coves.

Mezzanine is divided in two levels with a rail dividing the upper level and overlooking the lower level. The walls and ceilings are treated in a similar manner as the standee area. The auditorium is funnel-shaped toward the stage, and walls and ceiling step down in sections. Each section is broken by a light cove. The wall coves have dim house lighting and the ceiling coves bright house lighting. At each cove, a flowered baroque design in turquoise blue is worked in on the coral acoustic plaster background in a pleasing colorful effect. The entire theatre is done in a simple modern style, with colors, lighting, comfort, and convenience being given foremost thought."

Here’s a shot from my July 2010 trip to Corpus Christi:

The Centre was sold to local developers late last year (2011). Here is a link to a news article which includes interior photos of the theater: http://www.caller.com/news/2011/nov/01/second-set-of-developers-invests-in-chaparral/