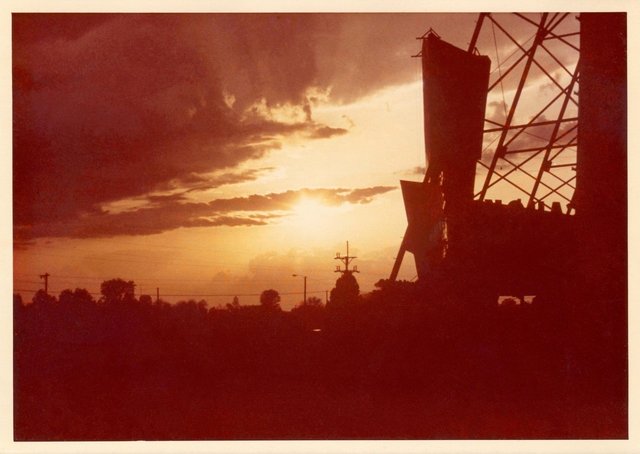 The Cahokia Drive-In was located on Highway 15 in Alorton IL. adjacent to the Cahokia Downs Racetrack. Alorton is a suburb of East St Louis. It was one of two drive-ins that were actually built by Bloomer Amusement Company (BAC), the other being the still open Sky View Drive-In in Belleville.

The Cahokia Drive-In was noted for its marquee, which featured a dancing Indian in neon lights. It opened September 22, 1955 with John Payne in “The Road to Denver” & Judy Canova in “Lay That Rifle Down”. It was closed September 30, 1978 and was demolished in about 1980 to make way for construction of Interstate 255. The racetrack also has been closed and demolished, leaving very little evidence of a once thriving business and entertainment area. The site of the racetrack has recently been developed into a new business park in Alorton which features a Flying J Travel Plaza on I-255

There is often a lot of confusion regarding the three drive-ins in the East St Louis area with connections to the name "Cahokia". The Cahokia Drive-In was actaually located in the town of Alorton. Meanwhile, the Furtura Drive-In was located in the nearby town of Cahokia. I had always thought that the Futura Drive-In at one point also went by the name Cahokia Drive-In, and I thought I drove by it and it had that name in the late 1970’s. But I may be mistaken because I think the Cahokia Drive-In in Alorton was still open at that time. It seems unlikey that two separate open drive-ins only a few miles apart would have the same name.

I would be interested to have that issue clarified. To add to the confusion, on the other side of East St Louis was the Mounds Drive-In (later the Falcon Drive- In) which was located on the site of Cahokia Mounds, near Fairmont City.

The Cahokia Drive-In was located in Alorton, but a few miles north of the actual town of Cahokia, Illinois. It was one of the Bloomer Amusement Company’s numerous successful locations at the time and, yes, the notable dancing indian in neon was impressive. However, the money that was given for the property was too much to argue with at the time and the drive-in was demolished, along with the race track, around 1980, to make way for the I-255. The Futura Drive-In was located on Route 3 and the only drive-in actually located in the Cahokia city limits. Built in the 60s, it closed about 1981 or 82 and did not feature a fancy marquee – in fact, the last time I saw it, the old marquee was used to advertise an auto body shop that used the property.

Much to the north of this, in Fairmont City, near the Fairmont Race Track, was the Falcon Drive-In (formerly the Mounds Drive-In), which was owned and operated by the Wehrenburg chain. This biggie (700 cars) was built on actual bulldozed Indian burial grounds (this was cool in 1949) and, before it closed, in the late 70s and early 80s, the drive-in was only open weekends showing adult triple features. Although in Fairmont City, this drive-in had an address of East St. Louis.

The only other memorable drive-in in this area would be the Shop City Drive-In, located in the heart of East St. Louis, on Summit, right behind a rather large shopping center, just off the I-64

The Cahokia Drive-In (in Alorton) ceased operation in 1978. The following spring the Futura Drive-In (in Cahokia) became known as the Cahokia South Drive-In. Since then confusion has reigned.

Closing night of the Cahokia Drive-In was September 30, 1978.
The ad in the Metro-East Journal read: “Last Chance! This Friday and Saturday are the final nights of operation for the Cahokia Drive-In. Yes, that’s right, the state bought us out to build a new highway and we are closing our gates forever. Witness the closing af a chapter in history and spend the night at our…Friday and Sturday All Night X-Rated Marathon.”

In the spring of 1979 the Bloomer operated Futura Drive-In, in Cahokia, is renamed the Cahokia South.

When are they going to build the highway? As it is right now it’s no better than a six lane goat path.

A better address is New Missouri Ave & US Route 50 & Missouri Ave, Alorton, Illinois. You can actually see part of the ramps remaining on the north side of the cloverleaf. http://tinyurl.com/qdybjyz

Directly to the north of the intersection that Kenmore mentions is an oddly shaped and out of place mini-forest of trees. Look close…that was the back corner of the drive-in.