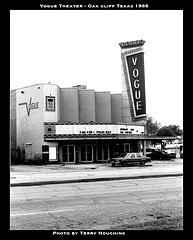 Close to Sunset High School on Jefferson Boulevard, the Vogue Theatre opened in 1948. It screened second run, independent movies, beach, monster, and B movies. It was boys night out in the 1960’s for high schoolers and date night for suburban teens who couldn’t go all the way downtown.

a july 1986 photo of the old vogue theatre along with 3 other old photos of dallas theatre’s they can be seen here.
View link

please disregard the last link post this is the correct one.
View link

The March 21, 1949, issue of Boxoffice Magazine said that the Vogue Theatre opened on March 21 with an invitation-only event for 500 guests. The public opening took place the following night, and the feature film “Blood on the Moon” was shown to a full house.

The Vogue was built by the Robb & Rowley circuit. The theater was in an entirely new building designed by the architectural firm of H.F. Pettigrew & Associates, but was located on the site of the 600-seat Bison Theatre which had been demolished to make way for the new house.

Here is another photo:
http://tinyurl.com/y8stb3n

The building is still there, owned by a church “La Luz del Mundo” but the whole facade is now destroyed so the owners can make it look more “church-like”. So sad.

I like how Mexicans will turn anything into a crappy church. :/

Sad to say that the Vogue Theatre no longer looks like a Theatre at all. The whole Facade has been renovated. What was originally known as the Bison, later the Vogue, now looks pretty much like a church.. I have a few photos I’ve taken recently I’ll post asap! RAC Photography Randy A Carlisle Historical Photographer

Robb & Rowley opened the theater, as noted in the comments above, on March 21st, 1949 (private screening) and March 22d (to the public). R&R eventually became United Artists. UA was said to have allowed its lease to lapse on the Vogue. It closed as a dollar house following August 29, 1972 with Skyjacked and Kelly’s Heroes playing for a dollar. The next day, the Texas Theatre just down the street became United Artists' replacement converting it from first run to a dollar house.