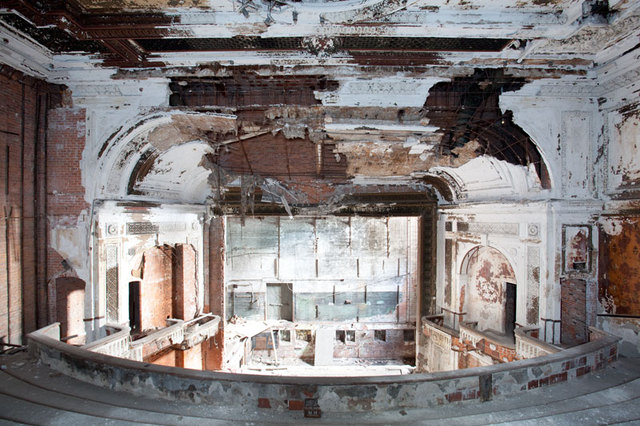 The National Theatre was opened September 24, 1911 as a vaudeville house, and designed by Albert Kahn in a beautiful Art Nouveau style with Egyptian elements.

The polychrome terra cotta facade is its most spectacular feature, with a large arched window, resembling a triumphal arch, and two minarets on either side, once topped by gilded domes.

The interior could originally seat over 2,200, and featured a large stage and simple but graceful decor.

Within a few years of its opening, it switched from vaudeville to movies, and by the 1940’s and 1950’s, had become a burlesque house.

Since its closing, the National Theatre, like so many of Detroit’s old movie houses, has fallen into serious disrepair, both inside and out. Its facade still looks majestic, though, despite its boarded-up entrance and decrepit marquee.

In 1998, a preservation-minded group called Cityscape Detroit went into the National Theatre to clean it up. There was consideration at the time of possibly renovating the long-vacant theater.

Here is a page for the National Theatre at the web site Buildings of Detroit. There are links to galleries with vintage and modern photos.

I just learned of this theatre in Detroit and the Michigan Theatre…such a shame.

I recently photographed the National. Check out some photos and a short write up at After the Final Curtain

Undated photo added. August 2016 article, and a related website below as well.

The proposed multi-million $ development of the Monroe Block might incorporate the façade of the National into one of the new buildings.