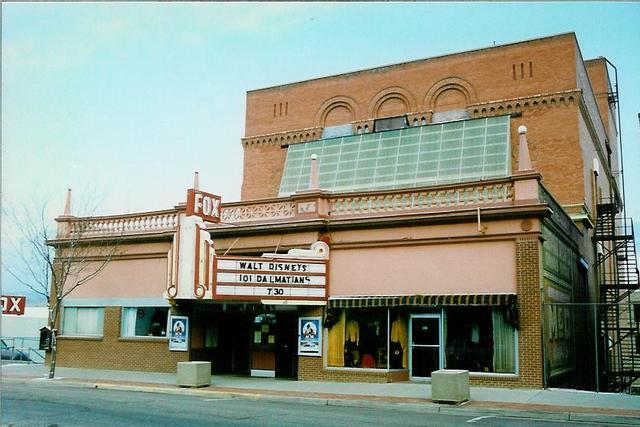 Originally known as West’s Theater, for its owner Ed West, a Trinidad, Colorado businessman, this theatre was designed by local Trinidad architects I.H. Rapp & W.M. Rapp (brothers to C.W. and George Rapp) along with a member of the firm, A.C. Hendrickson, construction began on February 17, 1907. On March 16, 2008, it marked 100 years since it opened. Excepting for brief periods for renovation through the years, it has the distinction of being Colorado’s oldest and largest extant theatre that has never closed.

The theatre’s foundation extends more than 40 feet below West Main Street. Total height of the stage wall is more than 115 feet. Two million bricks were used in the building’s construction, along with twelve carloads of Portland cement.

The general design throughout is in a Renaissance style, the interior being treated in a restrained Rococo Style of French Renaissance. The main entrance to the theatre proper is through a lobby sixteen feet wide and forty feet deep. The auditorium is sixty-three feet wide and the same in height. The proscenium arch is thirty-four feet wide and the same in height. The arch is elliptical in form and blends back to the front of the boxes where it meets the pendentive, filling the angle between the boxes and sides of the auditorium. There are two balconies, the upper most one is referred to as the gallery. Before seating was changed, and the gallery was closed, the auditorium could accommodate 1,150 people. Acoustics were said to be superb. Storefronts were located on either side of the main entrance to the theatre; one originally housed a bar/restaurant and the other storefront housed a drugstore.

The theatre opened on March 16, 1908, with the stage play “The Bondman”. For many years the theatre was the venue for stage performances, vaudeville, opera and silent movies. A ballroom was located in the basement which had its formal opening on May 20, 1908, and the first silent movie, a Cameraphone affair, was shown on November 3, 1908.

Ed West passed away on October 30, 1911, and his son Harry sold the theatre to the Kohn and Fairchild Amusement Co. on June 2, 1920. ‘Talkies’ made their debut on April 30, 1929, and in August 1929, Fox West Coast Theatre Company purchased the building. In October 1929, the theatre became known as the West-Fox Theatre. During March & April 1935, a marquee was added above the entrance to the theatre.

After October, 1942, ‘West’ was formally dropped for the theatre’s name, and it was known from then on as the Fox Theatre. On February 17, 1959, the theatre was sold to John, Marie and Salma Sawaya, a son and two daughters of a prominent Trinidad Lebanese family.

Mike Hadad, a nephew of the Sawaya’s, has been manager of the theatre for several years. As of mid-2011, it remained open screening a feature film seven evenings a week and an occasional matinee on Sundays. It was ‘temporary’ closed in the Summer of 2013. It was taken over by the city on January 8, 2019 and was re-opened as the Fox West Theatre, initially presenting virtual performances on-line due to the Covid-19 pandemic.

My wife and I discovered the Fox upon approaching Trinidad from New Mexico while on our Southwest vacation last month. I had no idea of its existence—and I know of a lot of theatres! While our schedule did not permit us to stay in Trinidad long enough to see “House by the Lake,” the movie which was playing there that night, I took many photos of the exterior from all sides, and shots of the gilded plaster and mosaic-floored lobby through the glass of the front doors. Indeed, what a spectacular building! I’m surprised to find that it was designed by the “lesser-known” of the Rapp Brothers.

The next day, we were in Golden, for a reunion of my father-in-law’s family, and I met a cousin of my father-in-law who is a realtor in Trinidad, and he described the theatre’s interior to me much like the account above, though in a little less detail architecturally. He also said that it had been used a few times in relatively recent years for some stage presentations, though this had been a rare occurrance. Next time we travel to Colorado for another family event, we will make a point of visiting the Fox. I hope it remains open long enough!

It would be nice to see some lobby and auditorium photographs; either early historic shots or the present. Pretty pleeeeeeze?

we were visiting trinidad,co and decided to watch a movie at the fox.we loved the fact that it was still in operation after all these years.after the movie we got a grand tour from MIKE and it was amazing, going back stage and seeing where it all happend many, many years ago.we took lots of pictures and almost every one of them had a uninvited guest but we loved it.and the fact that it still has a ball room under the theater was the iceing on the cake, thanx mike for a wonderful time sat. 12/17/08 please visit the fox theater if your ever in trinidad,co. you will always remember it. The Barrera family, Hesperia,Ca.

Here’s a couple of views of The Fox (the West Theatre name painted on the side of the building) from Christmas 1996:
View link
View link

Hi, I just joined today and I have recent pictures of the interior taken on January 11, 2014. I am on a mission to get the word out that this theater MUST BE SAVED. I implore anyone with connections to entities dedicated to saving treasures such as the West (Fox) Theater please share this photo link with them:
www.facebook.com/pam.colander/media_set?set=a.10152135007519799.1073741827.703679798&type=1 If this link doesn’t work go to Pam Wiebe Colander on Facebook, look under Photos and then the specific album for this theater. Hope you enjoy these new images!

Also, this theater is now closed to the public as of summer 2013.

The theater has been purchased by the city, with plans to “reactivate” it:

This house is once again using the name Fox West Theatre. Here is the official web site, which features numerous historic and contemporary photos, and a fairly detailed history of the house.